Decision to move north could be taken out of player’s hands, claims Ulster director of rugby 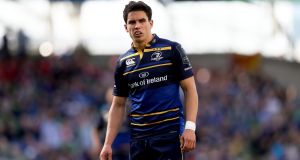 Ulster director of rugby Bryn Cunningham confirmed at the weekend that the IRFU are talking to Leinster about the prospect of Joey Carbery or Ross Byrne moving north, but said that Ulster Rugby has so far played no part in the discussions.

Since the departure of Ruan Pienaar and the revocation of the contract of Paddy Jackson, Ulster have been short of an outhalf while Leinster have three: Johnny Sexton, Byrne and Carbery, Ireland coach Joe Schmidt’s preferred backup to Sexton.

However, Carbery plays mostly at fullback for Leinster, and reports appeared last week that the IRFU wanted him to move to Ulster and spend more time playing at 10.

“At the moment the IRFU are working in that area with Leinster around that 10 scenario,” explained Cunningham after Ulster’s 24-24 draw with Munster. “We are not really involved in that. There are two sides to anybody moving within the Irish system. There’s what’s right for the player and him wanting to go and get more game time.

“On things like that, it’s a little bit outside our control. We will just sit back and see what the outcome of that is.”

Cunningham’s view appears to be contrary to what Leinster said last week about any move being at the discretion of the player, and he added that the decision to move or not can be taken from the player.

“In something like that it’s very much just a decision that’s taken from the player whenever the IRFU has got involved in it,” he explained. “They have looked at it and decided that there are guys there [who] are probably the top three of the four 10s in Irish rugby. They have said it might be more beneficial if one of them was playing elsewhere.

“It’s not really for us to go and initiate that conversation. We have to respect that the players may be in a different place. And they decided that they want to stay where they are.

“For us it’s more about if a player shows a genuine interest and the player is very keen and the player then wants to speak to the province. That’s whenever we would come to the fore and try and convince him that Ulster is a good place to come.”