Ulster cannot reveal the name of their next coach 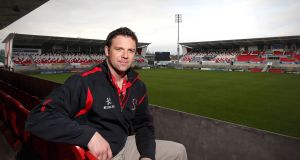 Ulster have said they cannot reveal the name of their next coach for another few weeks.

In an unusual move on Saturday minutes after their match against Munster, Ulster announced they had secured the services of a new coach, who had been endorsed by the IRFU.

The timely announcement was the most positive news story Ulster have had after a torrid few months.

Operations director Bryn Cunningham said the province had gotten their preferred candidate but his name will not be released for a number of weeks.

“We have the coach lined up, signed and agreed, our number one candidate, so we’re obviously very happy within Ulster and the IRFU,” said the former Ulster fullback. “Unfortunately, we’ll not be in a position to announce that for potentially another few weeks. As a group, we’re obviously happy that that’s been put to bed because it was a big thing for us.”

A number of names have been mentioned for the job, but Ulster say that their new head of coaching is not someone who has already been linked with the vacancy.

Cunningham was asked what the reason was for the delay in naming the new man in charge but would not be drawn.

“It’s just a mutual thing from our point of view and where the coach is coming from. You have to have respect for each other’s situation and it’ll take a bit of time before both are content to release it formally,” he said.

“At this stage, it would be disrespectful of me to go against other people and their wishes, but I’m positive we’re moving in the right direction.”

Cunningham would also not be drawn on whether the coach was Irish or not.

And he was reluctant to expand on the seriousness of the injury to Iain Henderson during the Munster match. The Irish lock left the match in the first half with an injured left knee.

The injury comes as Ulster face a possible playoff with Ospreys for a European Champions Cup place next season, while Ireland are due to tour Australia in June.

“He’ll take a day or two to let the swelling go down,” said Cunningham.