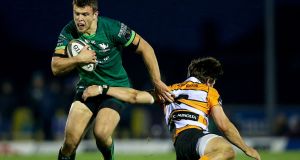 Connacht’s Tom Farrell in action against Cheetahs. Farrell is rewarded with a first start after scoring the two crucial tries that helped Connacht overcome the Cheetahs last weekend. Photograph: Inpho

Connacht will be confident, but cautious heading to Swansea today to face an Ospreys side desperate to record a second Pro14 win this season.

Missing players on the twin fronts of World Cup duty (eight) and injuries (10), Ospreys’ coach Allen Clarke will relish the opportunity to be back at home, having already lost away to three Irish provinces.

Last season Connacht produced an out-of-sorts display against an Ospreys side missing a similar number on international duty, but, a year more mature under coach Andy Friend, Connacht are on a run of three bonus-point wins.

They travel to Liberty Stadium with six changes – four up front, including first season starts for frontrow players Dave Heffernan, Dominic Robertson-McCoy, and locks Ultan Dillane and Joe Maksymiw, while Tom Farrell is rewarded with a first start after scoring the two crucial tries that helped Connacht overcome the Cheetahs last weekend.

Darragh Leader takes over a fullback for the injured Tiernan O’Halloran, with Stephen Fitzgerald moving to the bench.

Wales has never been a hunting ground for Connacht, but having produced a solid victory against the Dragons in Newport, followed up by their win over the Cheetahs , Friend is looking for momentum ahead of more serious challenges.

“Our win away to Dragons in round two was our first in Wales in a while, so we will be looking to back that up. We have Leinster and Montpellier coming up in the Sportsground over the next two weekends, so it is important for us to keep winning going into those games,” he said.

This is a fixture to test Connacht’s strength in depth and growing maturity.