England stick with tried and trusted for final showdown 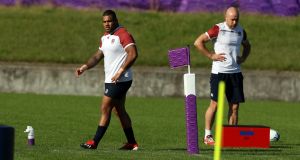 Kick-off: 9am Irish time, Saturday. Venue: Yokohama International Stadium. How to follow: The Irish Times liveblog will begin at 8.30am. On TV: Live on Eir Sport, RTÉ2 and ITV.

Perhaps mindful that Rugby World Cup finals can tend to be taut, tight affairs, and that such a game would most likely suit the Springboks more, Eddie Jones’ mantra after unveiling an unchanged starting XV for Saturday’s decider is for his team to play without fear.

With Kyle Sinckler having recovered from the ankle injury he sustained in the stunning 19-7 win over the All Blacks, not surprisingly Jones has stuck with that same starting team for the 2019 Rugby World Cup finale against the Springboks.

It features 10 players who are Test Lions and six from Saracens, with a seventh, scrumhalf Ben Spencer, the only change among the replacements instead of the injured Willi Heinz.

The 27-year-old Spencer only arrived in Japan on Monday and has won only three caps up to date. If he is used off the bench he will make his World Cup debut in the final.

To an almost incessant backdrop of cameras clicking, Jones told a media throng of about 150 people in England’s Tokyo base: “We’ve had four years to prepare for this game. We’ve got good tactical clarity about how we want to play, we’re fit, we’re enjoying the tournament – the only sadness is that the tournament is going to end.

“We’re having a great time, we want it to continue, but it comes to an end so we’ve got one more opportunity to play well. So we want to play with no fear on Saturday, just get out there and play the game.

“We know South Africa aren’t going to give us the game, they are going to come hard. We’ve got meet their physicality but we are looking forward to that and being able to impose our game on them.”

Reproducing the level of all-round excellence which they achieved against the All Blacks looks like a tough ask, but Jones maintains his team can one step further.

“We can definitely play better, there’s no doubt about it. The players know that. I have been so impressed by the preparation of the players throughout the tournament and particularly this week. There’s a steeliness about them but also a nice relaxed feeling because they know they’ve done the work so they can get on with the job.

“It’s all to happen on Saturday, isn’t it? That’s the great thing. We are like any team, we are a bit anxious, a bit nervous but also very excited about the prospect of playing even better.”

Although this is the final and hence the biggest game in the careers of all his players, Jones maintained he does not need to change the message to his team.

“That’s why the players can be relaxed, that’s why I can be relaxed because we know we’ve done the work but we are not relaxed about knowing what’s in front of us. We know South Africa’s going to come hard. They’ve got a history of being the most physically intimidating team in the world, so we’ve got to take that away from them.

“The boys know what’s ahead of them, everyone knows what’s at stake but, because we’ve had such a good preparation, we know we can go out there and play without any fear.”

The hype and expectation levels have multiplied in England since they dethroned the champions last week, but Jones pointed out that: “There has been no higher expectation than within the team. We started out the first day wanting to be the best team in the world. So that’s where we wanted to go.

Part Japanese, married to a Japanese woman and a former Japan coach, Jones has clearly relished spending almost the last two months in his second home, and reflecting on the World Cup thus far he declared: “It’s been a fantastic World Cup. The Japanese people have been terrific hosts, the stadiums are full, it’s been a great atmosphere – I’ve never seen so many foreigners wearing Japanese shirts at games.

“We had great support at the last game and expect to have good support on Saturday. It’s been a great tournament and I’m sorry it’s going to end.

“The uniqueness of a Japan World Cup is that it’s a neutral rugby country for all the top countries and I think that’s presented some opportunities and also some difficulties.

“We’ve had typhoons, different weather conditions so I don’t think it’s favoured one country or the other, or one hemisphere or the other. It’s made teams having to be adaptable, they’ve had to play in conditions where the ball is very slippery at the indoor stadiums.

“On Saturday it will be perfect conditions, 16 degrees, beautiful weather conditions for rugby. So it’s been a different World Cup and I think the teams who have adapted the best have probably enjoyed the most success.”

Also asked by a French journalist to reflect on the important moment or moments in the last four years, Jones wasn’t playing to his audience when he singled out the fifth leg of England’s Grand Slam in 2016 when beating les bleus 31-21 in Paris.

“In any team’s development you have wins that are important and losses that are important. When I think about this team, one of the most important was the Grand Slam game against France in 2016. We started the game probably within ourselves and it took us until the second half to find ourselves.