Gerry Thornley at the Tokyo Stadium 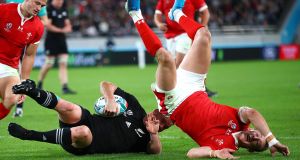 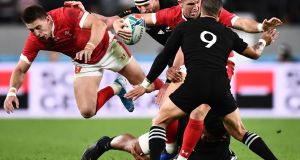 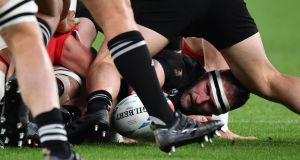 Kieran Read played his final game for the All Blacks before retiring. Photo: Kazuhiro Nogi/Getty Images

It may be unwanted, not least by the protagonists themselves, and it may be sniffed at, but if nothing else it was good to see so many illustrious names in the game sign off with smiles on their faces.

There’s no friendlier game than the third-fourth place play-off and this was the friendliest of World Cups.

One of the abiding sights amid the post-match scenes on pitch, as Wales bowed to all four sides, the All Blacks received their medals and both teams went around the pitch, was the sight of Reiko Ioane exchanging his boots for a Welsh jersey with a Welsh supporter who was down to his shorts.

There was another lovely moment when Ian Foster paid a very sincere and genuine tribute to Steve Hansen in the All Blacks’ post-match press conference, one which clearly moved the latter. Their warmth is palpable. Hansen thanked him , Foster patted him on the back and Hansen patted him on the knee.

Looking toward their night ahead, Hansen said they would have a good chat, a good laugh, “and probably get drunk”.

“Stop there Steve,” joked Kieran Read, who was also alongside them.

“These things don’t happen that often these days,” reasoned Hansen to laughs all round, before adding: “Or not as much as I would like anyway.”

Hansen had begun his press conference by paying tribute to his team.

“Firstly, I’d just like to say how proud I am of our team. There was a lot of external talk about not wanting to play this game. We’ve come off an extremely disappointing result against England, where we got beaten by a team that played better than us on the day, but we’ve come back and showed some real character and commitment to the jersey, so hopefully we’ve made a lot of New Zealanders proud.”

He also paid tribute to his opponents.

“I’d like to commend Wales, they came to play and it was a good game of footy. The game is bigger than all of us and we’re continually trying to capture people to become part of it.

“If you come with intent to play and look to try to score tries, like both teams did today, we can capture more and more people and get them excited about the game.”

“Lastly, I’d like to wish England and South Africa all the very best tomorrow. We’ll have a new world champion and we’ll commend them for their efforts because it’s a very hard tournament to win.”

Disappointingly though, Hansen did not extend the warmest of tributes to Warren Gatland, albeit the question related to their rivalry and to Gatland’s impending return to New Zealand with the Chiefs. Hansen began by noting that they’d crossed swords ten times and that the record was eight wins, one draw and one defeat.

“It’s been competitive yeah,” he said, a clear trace of irony in his remarks.

“He’s coaching a team in Wales that I used to coach, and he’s done a wonderful job coaching them. Having him back in New Zealand, I’m not sure how that’s going to work to be honest because he’s then going to go off and coach the Lions. So there’s not going to be a lot of continuity for the Chiefs.”

Looking to life after Gatland in Wales, Gatland himself said:

“I’ll miss their energy. They are a great bunch of men to work with,” Gatland admitted. “Everywhere we have been – hotels, training venues – incredibly positive about how this group of players has conducted themselves.”

“Engaging with fans and the public, they have been exemplary in the way they have conducted themselves, never complaining about how hard they train or hard they worked.”

After last week’s kick-fest in the second semi-final, Wales joined the All Blacks in seeking to keep the ball in hand and probe for spaces. There were 26 kicks apiece but this was against over 300 passes, not to mention 22 line breaks (16 by the All Blacks) and also 17 offloads apiece.

As well as Hansen and Read, Sonny Bill Williams, Ryan Crotty, Ben Smith and Matt Todd were all playing their last game for the All Blacks. So it was that the whole team particularly praised the try by Crotty when taking a perfectly out and in line to a trademark SBW offload.

Smith, with two sharp finishes at the end of the first half, including one of a truly stunning Aaron Smith skip pass, was only denied a hat-trick after recourse to the TMO showed that Ioane had fractionally diverted another SBW offload.

But Wales never went away and kept it reasonably competitive, remarkably so when considering their five day turnaround and injury-enforced, patchwork selection.

What Gatland has achieved probably sets him apart as Wales’ greatest ever coach. He’ll be some act to follow, whatever Hansen thinks.

But it was all predictably good fun, a far cry from the partisanship and intensity of the final.