Concussion rates down by 12 per cent at Rugby World Cup 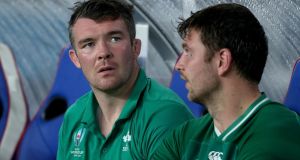 World Rugby has announced a reduction in concussions and injury replacements at the 2019 World Cup compared with the last tournament four years ago.

Confirmed concussion rates have dropped by 12 per cent from the 2015 competition, and 35 per cent when compared to 22 elite adult competitions in 2018-19.

Japan 2019 is the first World Cup to feature the High Tackle Sanction Framework, which is designed to reduce concussion risk by changing player behaviour from high-risk upright to lower-risk bent-at-the-waist tackles.

The governing body added that no delayed concussions have been reported, and concussion rates at the current tournament are 10.5 concussions per 1,000 player hours, compared with 12.5 four years ago.

World Rugby chairman Bill Beaumont said: “Our commitment to player welfare is unwavering, and a core pillar of our strategies is to reduce injuries.

“It is highly encouraging that Rugby World Cup 2019 has demonstrated extremely positive outcomes in this priority area.”