Connacht come away from Edinburgh with nothing

Fruitless trip to Edinburgh leaves Andy Friend's side up against it 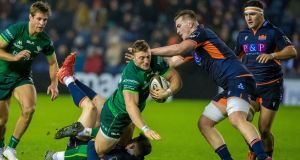 Connacht ’s hope of jumping into the top three after this weekend were dashed after the Galway side came away from Murrayfield with no championship points.

Against the Conference B leaders, Connacht were, for the most part, outmuscled by a strong Edinburgh side that gave little away and starved the visitors of useable ball.

Following an injury to prop Finlay Bealham that halted the match for several minutes it was Edinburgh who put first points on the board with a penalty by outhalf Simon Hickey.

At the conclusion to a scrappy first quarter Hickey doubled his tally with a second penalty after Connacht’s scrum was penalised.

Connacht had a chance to get on the board with a penalty to the corner only for Edinburgh to emerge with the ball from the resultant lineout. Then, when Matt Scott cut through the Connacht midfield the Scotland cap sidestepped the last line of defence to for a try under the posts that required extensive consultation between the referee and the TMO to confirm the ball had been grounded.

In the process of trying to stop the score Jack Carty was yellow carded for a high tackle. Hickey added the conversion for a 13-0 Edinburgh lead before adding a try after a series of pick and drive surges by Scotland prop Simon Berghan.

Towards the end of the first half Connacht had Edinburgh penned in their own 22 and profited with a Tiernan O’Halloran score that was converted by Carty to leave the Galway men trailing 7-20 at half-time.

Inspired by their 40th minute try, Connacht turned the screw at the beginning of the second half and they struck again with another series of pick and drives that again produced a try for O’Halloran and a second conversion success for Carty.

In a game that was morphing into a battle of the maul, Edinburgh engineered another of their pick and drive scores, this time finished off by prop Pierre Schoeman, who cleverly planted the ball at the foot of the post protector, the unfailing Hickey adding the conversion to open up a 13-point gap.

That margin was extended when Edinburgh attacked in the Connacht red zone and this time they used their backs, Hickey throwing out a long pass to the underused Duhan van der Merwe that gave the big wing room to battle over the line. From the touchline Hickey converted leaving Connacht staring at a 34-14 scoreline.

Shortly afterwards Edinburgh were reduced to 14 men after Eroni Sau was sent to the sin bin for a dangerous tackle, the first of a slew of yellow cards as the game deteriorated in the final 10 minutes.

Gerry Thornley on size of Ireland’s Parisian task; Son the star for Spurs again 07:48
Eddie Jones says he can’t guarantee England players will follow Covid-19 rules 06:55
Drogheda in the driving seat as Division One reaches a thrilling finale 06:00
Regionalisation may be the key as league adjusts to new reality 06:32
Damien Comer to miss another Connacht championship following hamstring injury 06:00
Here is your handy guide to sport on television this week