Leinster get the job done against Ospreys 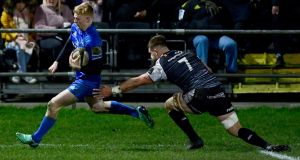 Leinster’s Tommy O’Brien beats Olly Cracknell of Ospreys to score the opening try in the Guinness Pro 14 game at The Gnoll in Neath. Photograph: Ryan Hiscott/Inpho

Even the unusual surroundings of The Gnoll failed to stop Leinster from recording their 12th straight Pro14 victory as Leo Cullen’s men downed the Ospreys.

Tries from Tommy O’Brien, Josh Murphy and Cian Kelleher and the boot of Ciaran Frawley kept Cullen’s side at the summit of Conference A, but they had to work very hard for this victory.

Shorn of their Ireland stars ahead of the Six Nations clash with England, Leinster showed no little bottle in difficult conditions against an Ospreys side who had been thrashed 53-5 in Dublin earlier this season. This was much, much closer, but still Leinster wouldn’t be denied.

Leinster’s previous visit to Neath had seen them win 36-25 in November 2003 with former Ireland centres Brian O’Driscoll and Gordon D’Arcy both scoring twice that day.

Ospreys outhalf Luke Price struck a post with a monster early penalty effort from halfway, but after being forced into action as an early replacement, it was O’Brien who opened the scoring.

From a ruck Leinster moved the ball nicely to the blindside and quick hands - captain Scott Fardy delivered the crucial pass - sent O’Brien over. Frawley converted.

Ospreys centre Kieran Williams came close to a response with a barnstorming run and Price missed another penalty while Williams also produced a fine turnover with Leinster on the attack.

Price finally put the Ospreys on the board just before the break and it soon got better for the home side. Leinster tried to build an attack, but Jimmy O’Brien dropped possession and wing Luke Morgan picked up and raced in to score.

Price’s conversion meant Leinster turned around 10-7 down after playing into the breeze.

Leinster retook the lead early in the second half. Following a series of reset scrums under the home posts, eventually the try came as Murphy crossed from close range underneath a pile of bodies.

Frawley converted, but it had been umber eight Rhys Ruddock who had laid the platform for the try with a powerful charge towards the home try line.

Price responded with a penalty to leave just a point between the teams at the hour mark as Ireland hooker Sean Cronin appeared off the bench to shore up the narrowest of Irish leads.

Leinster were certainly in a contest and Cullen knew it as he unloaded his bench, but he would have been delighted to see his team hold firm as his pack stood up.

They forced replacement Ospreys hooker Sam Parry to be yellow carded for a professional foul and with a man advantage, wing Kelleher waltzed over in the corner from Rowan Osbourne’s pass.

Harry Byrne converted, but this game was much closer than the final scoreline suggested.

1 ‘For 25 minutes I ran out of oxygen’: Pepe Reina on his coronavirus battle
2 Rory McIlroy admits Portrush nightmare was catalyst for his return to the top
3 Sky Sports customers set to save on bills until Premier League returns
4 Garry Ringrose to stay with Leinster as he signs two-year central contract
5 Gerry Thornley: Changes to tackle laws could transform rugby by time of next World Cup
Real news has value SUBSCRIBE