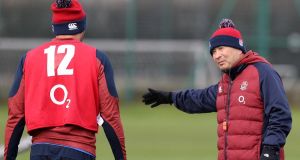 Eddie Jones insists England have a back three to face down Ireland’s aerial threat after being forced into a reshuffle for Sunday’s Twickenham collision.

After two starts at fullback, George Furbank has been ruled out of the pivotal Six Nations showdown by a long-standing groin and hip injury that sees Elliot Daly restored to the number 15 jersey.

The vacancy on the left wing created by Daly’s move is filled by Jonathan Joseph, who will mark his 50th cap by making his first Test start in the position having made two replacement appearances there.

One of Ireland’s strengths is the kicking game directed by Conor Murray and Johnny Sexton and their ability to challenge for the ball in the air, but Jones insists England have an accomplished trio patrolling the backfield.

“It’s no disruption at all. Elliot has played a lot of Test football at 15, so he welcomes the opportunity. We don’t feel he has got a deficiency (under the high ball),” Jones said.

“Jonathan has played on the wing for us before. He could play 12, 13 or on the wings. We used him on the wings during the World Cup, he’s a versatile player.

Jones stated that Furbank’s run of two caps has been interrupted by a troublesome injury, yet the Northampton rookie is one of two reserves for Twickenham.

“George is just not quite right. Rather than risk him — he couldn’t train yesterday (Thursday) — we felt like we were better off resting him this weekend,” Jones said.

“He has a long-term groin and hip issue that’s he had for many a year, and just needed to give it some time.”

There are four changes in personnel and two positional switches to the side that defeated Scotland 13-6 in the Calcutta Cup a week after falling to France in Paris.

Manu Tuilagi returns at outside centre after winning his battle with a minor groin strain sustained in the Six Nations opener that forced him to miss the trip to Murrayfield.

Henry Slade is also present after two months out with an ankle injury but the Exeter Chiefs playmaker must settle for a place on the bench, which once again sees a six-two split between forwards and backs.

“We are really happy with the team. It’s a good strong team — good forward pack, good backs. It’s great to have Manu and Henry back in the 23,” Jones said.

“They are both quality players. They have proven that over the last couple of seasons, so having those two back is a really good bonus for us. Manu is fresh, ready to go.”

The two-way duel for scrumhalf duties has been won by Ben Youngs, who ousts Willi Heinz.

Courtney Lawes displaces Lewis Ludlam at blindside flanker with the young Northampton Saint missing out on the 23 altogether, while Joe Marler comes in for Mako Vunipola at loosehead prop.

Vunipola has returned home to Tonga for family reasons, creating a vacancy in the frontrow, but Tuilagi’s comeback compensates for the loss of his gainline-busting power.

England must defeat Ireland to remain in Six Nations title contention, while Andy Farrell’s men are chasing the Grand Slam.

2 Lowry and Harrington avoid the elephant in the room