Sexton unfazed by the prospect of physical showdown at Twickenham 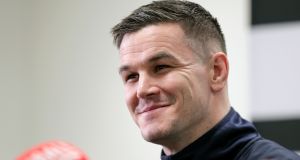 Johnny Sexton doesn’t quite lick his lips. But there has been plenty of talk of colliding bodies in Twickenham. He’s never been averse to it.

The Irish captain understands how these things work, that meeting England as equals in the collisions is the entry point. It’s what Ireland must throw on the table to match them in the pot before they can even begin to think about a Triple Crown win.

It’s the first challenge they face. Recent history has shown bossy England know where their strengths lie, an area, where last year, South Africa aside, they were the best in the world.

Bringing Manu Tuilagi back in and Eddie Jones harkens back to last year. Tuilagi’s strength made him one of England’s standout performers in both the Six Nations victory in Dublin and the World Cup warm-up win in August. Physicality.

“Yeah, yeah, that’s what’s happened the last two times hasn’t it,” says Sexton. “They’ve just got on top of us in that area and it’s very hard to come back from. So yeah it’s at the forefront [of our minds].

“When you’re playing against some of the pace that they have in the back three, and Tuilagi is back now. Obviously, a big ball carrier, so it’s right across the board. We all have to be as physical as we ever have been.”

There is a rugby think tank that believes Ireland don’t have the natural size, the innate genetic make-up to cope with bruising sides like England. Sexton takes that personally. Leaving aside his own willingness to fling his body into tackles and never mind George Ford, he will be seeing a bit of centres Tuilagi and Owen Farrell. But he is mildly insulted.

“It’s not just charging off the line,” he explains. “You need to be set early. You need to be in the right position first of all. Because if you are out of position, or you let them take the edge early and get over the gainline then you’re going backwards and they’re coming on to the ball.

“Winning the physical battle isn’t just about size. It’s about the little bits around that; being lower, all those things. I wouldn’t say they’re way bigger than us or way stronger than us. But we’re going to have to find ways to deal with their physicality and I think we’ve got some of it ourselves.”

Sexton says England have beaten Ireland across the board in every area in the last two games. He says he could talk all day about it, but the value of that has its limitations. He says it’s down to this Sunday and how Ireland can overturn some of those areas in which they were beaten.

There is also the matter of a Triple Crown, which as rugby evolves might seem like The Calcutta Cup between England and Scotland, an anachronism. A home union competition within a competition and excluding the ‘arrivistas’ Italy and France. But there has been a Triple Crown trophy awarded since 2006. Sexton defends the tradition.

“It’s huge,” he says. “I remember sitting in a team talk in 2010, Declan Kidney in charge and saying Triple Crowns don’t come by easy. I was sitting in a room with guys who had won multiple Triple Crowns over the previous years. I thought it was just going to happen. We were playing Scotland in Croke Park. We lost and I didn’t win one until a couple of years ago.

“You’ve got the chance to lift the trophy for Ireland and I know it’s not the biggest trophy you can win in terms of the Six Nations is bigger, or the Grand Slam, but it’s big for us, yeah.”

He’s aware that all the moving parts of the team choreography must connect in time and space if Ireland are to tear down Twickenham and he’s aware England are holding to a different thought pattern in their hopes to walk among the immortals. The arrogance is thriving but maybe there is more foundation to it than usual.

“I think they’re in a much better place,” says Sexton. “They’ve obviously been to a World Cup final. They’re talking about wanting to be the best team ever. All these things.”

All those things. Grist to Ireland’s mill.