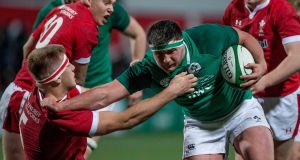 Thomas Clarkson will start at tighhead prop for Ireland against England in the Under-20 Six Nations match at Franklin’s Gardens on Friday night. Photograph: Morgan Treacy/Inpho

Ireland under-20 head coach Noel McNamara welcomes back centre Hayden Hyde and right wing Ethan McIlroy for the visit to Franklin’s Gardens to face England after an outbreak of mumps among the Ulster players upset his planning for the game against Wales in Cork .

Hooker Tom Stewart has also come through after suffering from the viral infection and makes this week’s bench as Ireland consider the physical dimensions of the challenge of England on home soil.

It means John McKee comes in for his first start of the championship at hooker, while Mark Hernan’s unavailability due to injury has forced a backrow reshuffle, with flanker Alex Soroka set for his full debut to complete the four changes.

England have made six changes with outhalf Manu Vunipola pulling out to return to Tonga on a family matter. He accompanies his cousins Billy and Mako Vunipola on the trip, with Mako having withdrawn from the senior team to face Ireland at Twickenham on Sunday. Billy is out of action with a broken arm.

England have won their opening two fixtures, sealing a bonus-point over France in Grenoble, as well as a victory over Scotland in Edinburgh and face an Ireland side who also have two bonus-point wins over Scotland and Wales. Like the senior squad, there is a Triple Crown at stake for Ireland.

“Look, they are obviously extremely physical. You don’t go to France and win, or win in Scotland because I firmly believe that is a good Scottish side. Very physical, very abrasive,” said forwards coach Colm Tucker of England.

When have England never been physical and never been abrasive? But coach McNamara pointed out that the fallow week has been important in the light of the physical challenge as it allowed the players to “take a breath and recover”, as well as review the first block of games and look ahead to this weekend.

The squad also had an instructive session with the Irish senior team in Musgrave Park.

“They are going to challenge us in different ways,” added Tucker. “They progressed in terms of they were able to open up France quite a bit off first phase and got some joy from that.

“They were really able to mind the ball against Scotland and push the width. There is a big emphasis on them winning collisions defensively as well. It’s going to be an absolutely massive challenge going over there but it’s one that we are very much looking forward to.”

It is Ireland’s first away game and England’s first home match with the Northampton crowd sure to provide a positive energy for England.

The missing home comforts for Ireland will put more pressure on them to improve a few areas, not least of all provide a greater care of duty to the ball and to play rugby in the right areas

“Going away is a bit different. And conversely, it’s England’s first home game,” added Tucker. “We won’t have the crowd to feed off, so it’s about feeding off each other’s energy individually. They’re going to get energy from their crowd, so it’s about how we manage it.”

One problem England face is they are missing some players, who are with their Premiership clubs. But Alan Dickens, the England head coach remains confident.

“A feature of our opening two games has been the squad’s ability to be clinical and control the game at key periods,” said Dickens. “But also their spirit and we know that will be important.”