Connacht and Friend turn their minds to Gloucester test 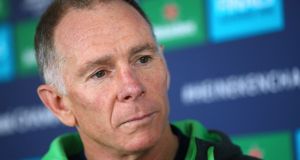 Andy Friend: “Not perfect, frustrating, a lot of errors . . . but we have the five points and we’ll take it and make sure we are better next week.” Photograph: James Crombie/Inpho

Having banked five points from Saturday’s PRO14 win over Southern Kings, Connacht have been given two days to “relax, refresh, and reset” before travelling to the English premiership venue where they have had no luck in the past.

The eight-day turnaround is especially beneficial for what Friend describes as a “massive” challenge in Kingsholm, coming after a home victory against Montpellier and the recent tough defeat to pool favourites Toulouse in France.

“We are there or thereabouts. Our Champions Cup will depend on who wins next weekend. If we get an away win, then we are very much in the hunt here, and if we don’t do that I think we might possibly have kissed goodbye to it,” says Friend.

Connacht’s set piece, which has been solid all season, was less reliable against the South Africans on Saturday evening in the Sportsground with several turnovers conceded.

“Sloppy, but we got five points,” was Friend’s summation. “Not perfect, frustrating, a lot of errors. We didn’t get discipline in terms of us doing our roles, but we have the five points, and we’ll take it and make sure we are better next week.

“If you make as many turnovers as we did, and you give as many penalties away as we did, then we are going to make tackles, so that is the penalty you pay. We were fortunate when we were able to build pressure we tended to get points, but it’s one of those games we certainly won’t be showing on the highlight reels.”

That said, there was no fresh injuries to report, solid returns for Jarrad Butler and Denis Buckley, while the one of the players of the hour was Bundee Aki, whose opening try provided a suitable backdrop to his recent decision to stay at the Sportsground for the next three seasons on his first central contract with the IRFU.

“A real sign of intent from Bundee and the IRFU as well. It’s a compliment to the man and what he has done, and it’s great for Connacht and region to have a player of his calibre commit for another three-and-a-half years.”

And with Kieran Marmion, Butler, Tom Farrell, Tiernan O’Halloran, and Sean O’Brien having re-signed, Friend believes the commitment from this core group of players reflects the feeling of optimism surrounding the club.

“They are sensing something is building within Connacht – our job now is to collectively get that talent to its optimum and start delivering wins”.

That Connacht delivered the necessary victory over the Kings without performing at their best was “just one of those nights”, but other than the result, there were more positives for Friend, including the performance of former Australian Sevens player John Porch who bagged two tries.

However it was Aki who took the plaudits for the opening try after 12 minutes. Mistakes had beset both sides but, after the Kings spurned a certain scoring chance out wide, they provided the home side with a platform from two successive penalties to touch, and it was Aki at the tail of the maul who claimed the touch, with Conor Fitzgerald adding the extras.

The visitors responded similarly, and attacking the Connacht line, centre Eric Cronje exploited a defensive gap to burst through on the angle and score with fullback Scott Van Breda levelling the scores.

Connacht’s lack of clinical execution cost them a second try before prop Finlay Bealham finished off another forward drive. And when Porch added the third try on 28 minutes after a superb attacking phase, instigated by Conor Fitzgerald, Connacht led 19-7.

The visitors, too, showed their prowess with ball in hand. Reaping the benefits of two penalties and the pack having set up position, the South Africans patiently recycled until Van Breda took advantage of an overlap to reduce the arrears to 19-12.

The home side, however, wrapped up the game soon after the restart.

Porch did well to finish off in the corner for what was the last score in a poor second half that failed ignite.