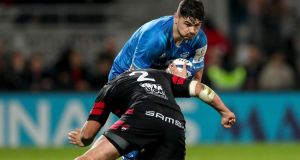 Just one try from Max Deegan decorated round two of this Champions Cup match defined by hardy Leinster pragmatism and a hard-running but disjointed home side. Lyon badly missed their injured Fijian winger Josua Tuisova.

Yet Lyon spent much of the opening quarter spilling the ball, and their over-eagerness aiding Leinster. Little got past the defence to threaten the line.

While Lyon dominated territory and possession, Leinster were patient and gobbled up their first chance. Josh van der Flier blocked down outhalf Jonathan Wisniewski to feed James Ryan, who took off with van der Flier in pursuit to clean out inside the Lyon 22.

Quick to the scrambling Lyon defence, Leinster picked and drove and five phases later a duo of Deegan and Rhys Ruddock bundled over the line brothers in arms, Sexton converting for 0-10.

Even when Jordan Larmour was binned for leaping at the ball from an offside position, Lyon could not get on the scoreboard, and remained pointless until the break.

Lyon No 8 Carl Fearns took up the ball and muscled in wherever he could while drawing some big tackles, while scrumhalf Baptiste Couilloud and Charlie Ngati were dangerous pushing forward.

Yet too often they made it easy for Leinster, who fell into a basic kicking game in the second half, knowing they could win with solid play and Lyon mistakes mounting.

Leinster could have added to their points on 53 minutes when Ryan went soloing up the park.

A referral a few minutes later for a hit off the ball on Sexton by Fearns drew the crowd into the action, but Lyon didn’t have the composure or ability to go through the phases and the match became an arm wrestle of kicking and set pieces.

A penalty from captain Wisniewski on 67 minutes to close the gap to 3-10 was followed by Sexton taking it to 3-13 as the tempo lifted and Lyon became desperate in the tricky ground conditions.

Another penalty from Wisniewski on 78 minutes for 6-13, and Lyon pressed for what they hoped would be a glorious draw.Yet Leinster were good enough to stop it and Lyon poor enough not to have the consistency to bring it on.

Lyon left frustrated; Leinster like urchins with the booty and understanding that Europe is sometimes winning ugly on the road.