Cheetahs unable to chase down Connacht 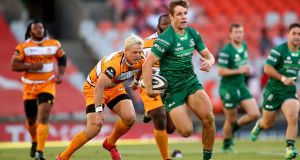 Connacht claimed a second win of their South African tour as first-half tries from Tom Farrell and Gavin Thornbury helped them to the points in Bloemfontein. Following last week’s win over Southern Kings this was another hard-earned win for Andy Friend’s side, but they managed to close out the win in the searing heat of the Highveld.

Connacht led by five points at the interval and they stretched their advantage thanks to a couple of penalties from replacement David Horwitz, but they were made to sweat until the final moments after Shaun Venter’s try gave Cheetahs a chance of victory.

It took Connacht some time to find their feet at altitude and a couple of early kicks went astray, but they soon powered into the lead when Tom Farrell scored off a first-phase move off a lineout. Jack Carty was on the mark with a brilliant conversion from the left.

A bright Caolin Blade break was just about halted by the Cheetahs defence within touching distance of their try-line, but Connacht stretched their lead in the 12th minute when Carty slotted a penalty off the tee, which was earned by Robin Coepland at the breakdown.

Cheetahs had their chances to score but their passing and ball handling skills deserted them at key moments. Connacht on the other hand were efficient in attack, and their second try came after 28 minutes when Thornbury popped up at the back of a driving lineout to score.

Malcolm Jaer ran clear just after the half hour mark for Cheetahs’s first try and four minutes later Joseph Dweba mauled over for their second, but they trailed 15-10 at the interval.

Cheetahs continued to improve, but it was Connacht that stretched their lead when replacement Daniel Maartens entered the side of the ruck and Horwitz kicked them eight points clear.

The influx of replacements was most welcome from a Connacht point of view and the fresh legs helped earn a penalty for the westerners after 65 minutes, which Horwitz easily kicked to extend the lead to 11 points.

It proved a good decision considering Cheetahs’s third try from Sean Venter put just four points between the sides with seven minutes to go, but this time Connacht held on to their lead to claim victory with a late Jarrad Butler poach proving crucial.