Andrew Conway underlines his try-scoring quality with a hat-trick 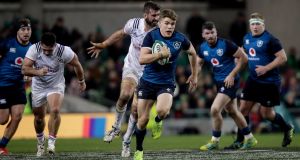 Ireland’s Garry Ringrose in full flight against the USA at the Aviva Stadium. Photograph: Billy Stickland/Inpho

When you know how to win, you know how to win. Ireland haven’t always had it easy this November, but invariably have found ways to pull ahead or pull clear, usually in the third quarter, and it was no different here when subduing the USA to register their second half-century of the month.

To some degree the game plan was designed to run the legs off the Americans with a ball-in-hand approach as Ireland went wide, and also from deep in their own territory, more than normal. They also scrummed them into submission in the third quarter, and thereafter ran in another five tries to supplement their three from the first half.

Having used 43 players in this window, and with Conor Murray, Sean O’Brien and Chris Farrell to come back into the mix, Joe Schmidt admitted that were he obliged to pick a World Cup squad now “it would certainly take a while”.

“In the context of the limitations around the World Cup, they give you 31 players and give you six- and five-day turnarounds consecutively. Player welfare-wise it’s not ideal, but therefore you need to be conscious that you need robust players, players who can back up week-to-week.”

“That’s the brutal reality of going to a tournament like the World Cup. I think we get some of the best games you can possibly get in the Six Nations because you allow players to sprint, take a breath, sprint and take a breath again, then take the final sprint.”

Losing the first test in Australia “was probably not the worst thing for us to experience, although at the time you’re never happy to lose a Test, particularly when we had put a number of wins together,” said Schmidt in reference to the first Test defeat in Australia with a slightly experimental side, but for which Ireland might have set a new world record of 19 wins last Saturday.

“It was disappointing but you’re looking for growth and looking for the opportunity to demonstrate that there’s resilience, and I thought they were resilient in Melbourne, kicked on and showed resilience again in Sydney. And I think they were good in all four games enough of the time [this month] to actually deserve the four wins that we got.”

If anything the waters have been further muddied over this past four weeks, but in a positive way, and this pattern was maintained in Ireland’s 12th successive home win here.

Most obviously Andrew Conway underlined his try-scoring quality with a hat-trick. Whereas Schmidt described the performance of the last winger to achieve the feat, Craig Gilroy off the bench in Rome two seasons ago, as “a mixed bag”, here the coach also praised Cownay’s “work off the ball”. His assists for Jack Conan and Luke McGrath were just as classy, although the latter (when gathering his own chip) was ruled out for Cian Healy’s forward pass.

Will Addison was another winner over the month even though a head knock confined him to the first 40 minutes here. Effective as a late call-up at outside centre against Argentina, he was good under the high ball at full-back, gave a trademark assist with an out-the-back offload to Conway, again looked composed on the ball and moved effortlessly to left wing. That’s three different positions in three caps.

Darren Sweetnam was unlucky to miss out after aggravating a back problem in the opening half-hour, while alongside Garry Ringrose – just excellent in everything he did – Stuart McCloskey ran hard in a good shift.

Joey Carbery was presumably playing to tactics in orchestrating a running game, and had some nice moments at out-half before also reminding us of his versatility when shifting to full-back. His place-kicking has become a real strength too, and his eight from nine here made it 21 out of 23 for Ireland in 2018.

Sweetnam’s misfortune afforded Ross Byrne another assured and seamless 27th minute introduction off the bench, punctuated with one of his trademark on-a-sixpence crosskicks for McCloskey’s try.

Ditto Luke McGrath of his third cameo off the bench, and John Cooney had a sharp first Test off the bench. Scrum-half is interesting, and Cooney does have the goal-kicking string to his bow, as well as a facility to cover “10”.

The front-rowers all showed up well at scrum time and in their carrying, although David Kilcoyne over-ran the ball, picked the wrong pass and over carried on another occasion, while Niall Scannell lost a couple of throws and Finlay Bealham missed his tackle when Joe Taufete’e stormed over for his 14th Test try.

The lost throws may count against Iain Henderson, as well as his binning, but he had many good moments, not least in defence, and while a missed restart and avoidable penalty were blemishes on Tadhg Beirne, overall he again demonstrated his all-round ability, athleticism and skill set. For Conway’s second try the flick off the ground from the base was his fourth involvement.

In leading Ireland to a sixth win in six as captain, Rhys Ruddock was very good when Ireland needed him most, namely in that first-half, and he’ll rarely have a better assist than with his searing, in-and-out carry and try-scoring return pass to Conway for the opener.

There was a try for Jack Conan in an efficient all-round performance and, typical of him, Jordi Murphy began an industrious performance by winning a turnover and ended it with a good line and offload for the final try by John Ryan. And like Quinn Roux, who also scored his first Test try, Ryan provided oomph off the bench.