Punches, kicks and mass brawls: The 1977 colours match had it all

From The Back Pages: Trinity came out on top but 1977 is remembered for much more 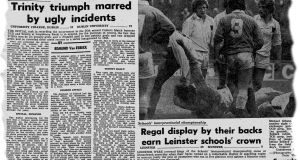 The 1977 colours match between Trinity and UCD was just a few minutes old when UCD hooker and Ireland international John Cantrell took a hefty punch to the head. There was barely time to look up before the Trinity winger – who had sprinted quite a long way to throw the dig – had scarpered back into position.

And so, the tone had been set.

The annual meeting between the two biggest universities in Dublin had always been a fiery affair with the lead generally set by the huge swathes of students on the Lansdowne Road terraces who took every opportunity they could to throw eggs, fruit, toilet roll and more at the players on the pitch and at each other.

The two teams had been fighting each other – and sometimes playing rugby – for the Colours Cup since 1952 with UCD coming out on top more often than not. However, 41 years ago on November 30th Trinity were the victors in a game which, depending on what side you listen to, either marked the day it all got a bit out of hand or the day when Trinity stood up and hit UCD back. The city centre university beat their Belfield counterparts 21-12 to spark what would be a winning run of four-in-a-row, led by future Ireland international Donal Spring and captained by Willie Ryan. However, in 1977 it was not the result that would be remembered.

Beneath a headline of “Rugby ructions” on the front page of The Irish Times the next day the story was told of how “the punching and kicking started soon after the kick-off. Practically every player on the pitch was involved as fighting broke out after a loose maul on the halfway line. Groups of players rushed at each other and swapped punches and kicks for more than a minute.”

Looking back on that day in Lansdowne Road, Cantrell – who had already been capped by Ireland and would go on to win nine in total – reckons there was specific targeting going on.

“Normally in a game like that you might have one main confrontation at the start of the game but it actually blew up a few times which was more unusual,” he says. “So it was a little bit more than you’d expect but rugby in those days was a tough man’s game and you had to look after yourself.

“There’s no doubt that Trinity went out with the intention of starting a fight early on to make sure that everyone knew they were in a game. My version of events would be that I might have been targeted in a scrum early on and it blew up from there. They’d say that’s not what happened but in my view it was what happened. So they had a go at me at the start and then it kept going and other people joined in. But it looked worse than it was in reality.”

The reality was that, while there were no serious injuries suffered, there was a first for a colours match when Trinity’s John Telford became the first man to be sent off in the yearly encounter for, according to referee Peter Hughes, “kicking an opponent in the back”. The following day the newspaper columnists were not shy in voicing their disgust at the incidents on the pitch.

Writing in The Irish Times, Edmund Van Esbeck wished that he was “permitted the licence of erasing the memory of the happenings in the first half and obliterating them from the storied annals of university rugby in this country.”

In the Evening Press John O’Shea wrote that “for the sake of rugby football in the country those responsible for yesterday’s shameful happenings must be given a forceful reminder that rugby is a sport.”

The colours match was more than that, though. It was the biggest event of the year for both colleges with the hype building from early in the year and both teams focusing specifically on the big game in November. As Cantrell says “this was the biggest game a lot of the players would ever play in”.

The rivalry was fierce, the stakes were high and for any aspiring rugby player in either university this was the highest honour. The colours ball – held in those days at places such as the Shelbourne and the Gresham – was the added bonus although, Cantrell says, it could get a little out of hand even in such grand venues.

“There would be a bit of rowdiness even at those but in a good way. You’d just throw an odd pint or throw a bit of pie or whatever – it was more of a laugh than anything else. The most important thing is to have a pint afterwards and enjoy the occasion. What happened on the pitch stayed on the pitch.”

What happened on the terraces, on the other hand, didn’t quite stay on the terraces. The antics of those students watching on had always been a feature of the colours match with eggs, fruit and sometimes flour the preferred missiles of choice.

However, in 1977 there was a difference and it perhaps offers a clue as to the ire of the various newspaper reporters in their reflections. At the time of the match the west stand was being rebuilt, meaning the press had to sit upstairs in the east stand – just above those rowdy, and inevitably inebriated, supporters.

It didn’t take long for them to realise that throwing eggs and flour into the press box was just as entertaining as throwing it on the pitch. The writing of the journalists who were being bombarded shows that they didn’t take so kindly to such treatment.

“It is appreciated that it is no place for the faint-hearted spurred on by the vociferous promptings of the supporters on the terraces, and some of those yesterday would have been more at home in the jungle,” wrote Van Esbeck in The Irish Times.

Con Houlihan, writing for the Evening Press, went so far as to compare the students to football supporters, no less. “It seems that in a colours game you can get away with what might not be acceptable even at Croke Park or Dalymount,” he wrote.

While the worst thing that any of the players experienced from the crowd was Spring seeing the ball knocked off the tee by an orange peel as he prepared for a kick, this was somewhat of a turning point in both the atmosphere and indeed the results of the colours match as Trinity went on to win the next three-in-a-row inspired by Spring and, later, Hugo MacNeill.

Cantrell played three in total himself while also playing for Leinster but he has no doubts that the colours match was the biggest event of the year, bar international duty. The match would regularly attract more fans than even a Leinster and Munster derby and was the making, or breaking, of everyone who played in it. Even 41 years later the memories remain clear.

And as for the punch that Cantrell took in the opening minutes? Well that was delivered by the brother of his girlfriend (and now his brother-in-law) Barry Devaney who, Cantrell says, then turned on his heel and “ran away as fast as he could”.

This is part of a series called From The Back Pages, examining stories and events that have made the sports pages of The Irish Times since 1859. If you have suggestions for stories you would like to see featured email rcroke@irishtimes.com or get in touch on Twitter @Ruaidhri_Croke. For more information on subscribing to the archive, see www.irishtimes.com/archive.

Dundalk take the points but Shelbourne pointers are positive 22:07
Munster break Zebre resistance in second half 22:06
Ireland Slam England at the Gardens to open up Grand ambitions 21:56
Connacht come away from Edinburgh with nothing 22:08
Leinster get the job done against Ospreys 21:54
Here is your handy guide to sport on television this week