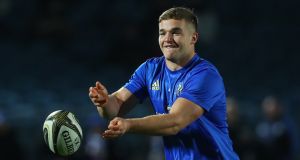 Leinster’s Scott Penny: he made his debut against the Ospreys last week. Photograph: Tommy Dickson/Inpho

Retaining Caelan Doris at number eight suggests a newly-formed pecking order as Jack Conan (currently injured) and Max Deegan (currently slumped to third choice) must witness the rise of another special talent. Deegan will get his chance here, but Doris has the jersey.

Scott Penny’s bicep-bulging debut against the Ospreys last week should cause anxiety for Seán O’Brien, Josh van der Flier and Dan Leavy. Of course it will have no such impact on these established Ireland opensides. David Nucifora, on the other hand, may need to intervene and spread Leinster’s backrow wealth to other provinces.

At scrumhalf such logic is already occurring as the Munster-bound Nick McCarthy does his career a favour by moving to Limerick before Paddy Patterson formally arrives. The 20-year-old Blackrock prodigy will relieve Jamison Gibson-Park on Saturday to earn cap number one.

Ross Byrne needs a convincing performance at outhalf – and not just the usual kick passing clinic – to keep Ciarán Frawley at bay.

Loosehead prop is another area where Leinster exude power, with Nucifora surely keen to unburden them of Ed Byrne. And his benched twin Bryan. The Carlow RFC brothers are already 25; both would be established starters in any other Pro 14 squad.

Ed Byrne, a player with enormous potential, only makes his 30th appearance in blue because of historically immovable objects called Jack McGrath and Cian Healy.

The same narrative extends to Ireland wingers Adam Byrne and Dave Kearney, whose careers have stalled due to form and fitness, but both seek to light up Rodney Parade.

“It’s an opportunity to show what you can do,” says Byrne. “Hopefully push a way into the match 23 against Bath.”

Among this Leinster offering we also find the next wave of Academy graduates. Jimmy O’Brien reappears from Sevens to perhaps transfer the footballing gifts that were so impressive at under age for Newbridge to the main stage.

The same goes for Hugo Keenan and less so Conor O’Brien, as the inside centre has already revealed serious physical prowess.

Scott Fardy leads the side. If the 39 times capped Wallaby builds upon his performance at the RDS last weekend, Michael Cheika, or whoever runs Australia next year, will have to recall the 34-year-old.

Despite so many ominous warnings, Dragons coach Bernard Jackman will have identified a real and rare opportunity to catch the champions. This moment only presents itself when Johnny Sexton and his lieutenants are being held for European battles.

“When we played them in Round Three we played 25 minutes with 14 men and it was difficult,” said Jackman of September’s sobering 52-10 defeat when Ross Moriarty walked for bumping Johnny Sexton off the ball. The Lions flanker is back in the fold, although Jackman keeps him on the bench.

“Our discipline has to be spot on, and the improvement with our defence needs to continue. It will be tested under the most extreme circumstances, and we have to be ready.”

Strong indications point towards a Leinster victory, with the killer scores accumulated either side of the interval, but all 80 minutes are worthwhile to track the development of Joey O’Brien, Penny and Doris.

And observe the Byrne twins before making Cullen’s case to keep them so far down the Leinster roster while other provinces could oil the Irish system by exposing them to Champions Cup action.

Like Jackman on Saturday night, next week pits a former Leinster man, Bath attack coach Girvan Dempsey, against his boyhood team. Another fascinating line-up, including Doris but surely not Penny, is promised.