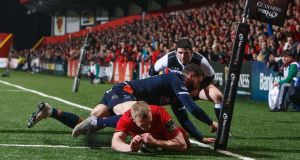 Keith Earls scored a hat-trick but he was outdone by Chris Farrell’s brilliance in another sublime Munster home victory, this time against Edinburgh.

Tyler Bleyendaal scored the other Munster try, and Conor Murray was also in fine form on his first start of the season, he finished up on the right wing.

Munster scored six tries in the first-half and they held a 34-7 lead at half-time. Duhan van der Merwe came up with both consolations for Edinburgh but they were completely outclassed.

The victory brought Munster to within three points of Glasgow Warriors who still lead the way in Conference A of the Pro14. And Munster will relish the upcoming back-to-back Champions Cup games against Castres now.

Munster had won all four of their home games this season while Edinburgh lost four from four on the road. Edinburgh head coach Richard Cockerill had also rested his entire Scottish international contingent ahead of their back to back games against Newcastle Falcons in the Champions Cup.

But Munster were still incredibly accurate as they punished their visitors in the fifth minute. Farrell, Murray and Peter O’Mahony were all involved as the hosts worked their way up field early.

Arno Botha broke the gainline in midfield and Murray’s delayed ball gave Billy Holland the opportunity to make even more ground, as they plundered their way to inches from the line.The Edinburgh defence were slow to close the distance and Farrell was powered his way over.

The young Edinburgh team kept Munster at bay for the remainder of the first quarter until Conway broke to score. Chris Cloete took the ball off the back of a rolling maul, he passed to Hanrahan and Conway darted off his inside shoulder to gather and run in unopposed.

Munster looked like they would take complete control when Conway doubled his tally in the 19th minute. It was a fantastic backline move with Farrell central again.

Edinburgh lock Callum Hunter-Hill fumbled his side’s lineout and the ball was worked into midfield where Farrell brilliantly linked with Hanrahan, the Munster outhalf passed to Mike Haley and Conway was on the right wing for another try.

Hanrahan scored the conversion from right touchline and Munster were 19-0 up. They had all of the confidence and momentum but got caught completely against the run of play.

It was just one minute after the drop-off when Edinburgh attacked down the left and Juan Pablo Socino drew a couple of Munster defenders before he gave the pass to George Taylor and he found van der Merwe on the edge.

The South African still had plenty of work to do but he brushed off the weak attempted tackle from Haley and produced a huge hand-off on his fellow countryman Cloete to touch down Edinburgh’s try.

Jaco van der Walt added the conversion and Edinburgh were back in the game when they only trailed 19-7 after 22 minutes.

But the experience that Munster had in their ranks would prove pivotal before half-time and they had their bonus point try by the half-hour mark.

Niall Scannell threw into a lineout deep in the Edinburgh 22, Holland claimed possession and when Botha looked like he was set to score on the back of the maul, Murray fed Earls to score in the left corner.

Earls only had to wait four minutes to score his second try and it Munster’s best effort so far. Farrell showed great footwork and power to break through the defence, he passed to Haley and with the tackles closing in he looped a ball to the Ireland winger for another easy finish.

Munster were already 29-7 ahead and the only downside was Hanrahan’s four missed conversions. But Earls completed his wonderful hat-trick two minutes before the interval when he scored after some more heroics from Conway and Haley.

Hanrahan missed again but Munster were 34-7 ahead at half-time and they had to wait until the 64th minute for Bleyendaal to score.

Van der Merwe showed his brilliance when he scored in the left corner but Farrell rounded off the scoring.