Bundee Aki’s Connacht return could come against Ospreys on Sunday 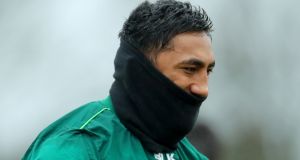 Connacht are hoping Bundee Aki will be fully fit for Sunday’s rescheduled Guinness Pro 14 fixture against Ospreys in the Sportsground.

Aki, who has been nursing a knee injury, was due to run out with the squad on Tuesday, having “stepped up” training with a view to lining out against the visiting Welsh team.

The Ireland centre’s last game was at home in Connacht’s Champions Cup loss to Bristol, and coach Andy Friend says if he continues throughout the week to train, he is likely to feature against Ospreys.

“He’s close. He is doing some running this week, and if he is fit, we will make him available for selection. There is still question mark on that, but he’s not too far away.

“We need to do the right thing for Bundee. If he comes through today, there’s every chance he will train tomorrow and the following day. If he does that, then he becomes a viable option for us.”

It would be a timely return with Sammy Arnold the latest to be ruled out after having surgery on a chest injury, while Tom Farrell remains sidelined with an ACL injury.

Tom Daly, who has been “fantastic”, and Arnold formed a strong midfield pairing throughout the interprovincial series, thus Aki’s return would be a huge plus, along with Peter Robb, who has recovered from a groin injury.

“Peter Robb has been training hard. He’s been waiting his chance, and the timing couldn’t be better,” says Friend, who is in talks with Connacht chief executive Willie Ruane to extend his contract beyond three years.

“Whether Peter or Bundee [play] is to be decided. What we do know is that we are not going to put him [Bundee] at undue risk.”

Having faced a possible three-week break from action, Connacht’s refixture is a boost for Friend’s side and also for Ireland players ahead of the Six Nations. In addition to Kieran Marmion, Jack Carty, Ultan Dillane and Dave Heffernan, Friend is hoping prop Finlay Bealham will get another chance to perform after playing loosehead against Georgia.

“I thought he put out an impressive performance, albeit he did give away a couple of penalties, but he was up against a Georgian team with one of the better scrums in the world, and he was playing on a side he’d not normally play on.

“The one thing about Finlay, he’s a ball of energy, and on the tighthead side, he’s a healthy scrummager. He will hold that right side up for you and puts a lot of pressure on the opposition looseheads.”

Also a strong carrier, Bealham , he says “gets off the line quickly and puts his body on the line”, while “his defence is up there with the best in the country”, Friend says.

“We love him here, and I know if he gets a chance, he’ll go out and have another big performance, and hopefully he’ll get another chance in the Irish squad.”

Connacht reported no Covid-19 cases, which Friend says is impressive.

“More than 90 tests and not one positive case. It sounds easy, but it’s not. The community transmission out there is quite phenomenal, so to know we don’t have a positive case, again, another week when we don’t, there are a lot of sacrifices being made, a lot of commitment from individuals that is probably not being seen.

“We are doing it for a few reasons, so that we can keep rugby going in this country and certainly in Connacht and because we know it is important for people to see us play.”