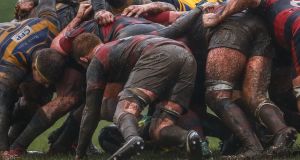 Tullamore RFC vs Bangor RFC last February. The AIL has been on ice for almost a year now. Photo: James Crombie/Inpho

At his end-of-year briefing with the media when this reporter asked David Nucifora about the club game, the Union’s high performance director said: “I’ve had my hands full with the professional game and I haven’t really been across where that’s at with the club and school games.”

That went down like a lead balloon with the clubs. In 2018, Nucifora and the IRFU had proposed to restructure the Energia All-Ireland League to make it more aligned to the professional game, ring-fencing two top divisions of eight clubs apiece while ensuring the presence of teams from each province and, initially, without relegation. It would have upped standards and filled the void left by the demise of the British & Irish Cup while also stimulating the club game.

But ensuring the presence of clubs from Connacht and Ulster would, effectively, have meant enforced relegation for clubs from Leinster and Munster who have achieved Division 1A or 1B status on merit. Scrapping promotion and relegation would also have closed off the pathway to the top flight(s) while clubs in the lower divisions feared, rightly or wrongly, losing their senior status.

Akin to asking turkeys to vote for Christmas, the clubs rejected it and it seemed almost spiteful when Nucifora then organised the Cara Cup at the end of the 2018-19 season. All four provinces were obliged to send teams to Massachusetts to play the New England Free Jacks. The provinces had to dip heavily into the clubs not only at a time when the AIL was reaching a climax but against opponents from a league, the Major League Rugby, which targets club players in Ireland.

The clubs are the grassroots of the game. Simple as

To a degree, Nucifora was entitled to say that the club game was not really part of his remit. Even so, the provinces report to the IRFU’s High Performance unit, which in turn reports to Nucifora. There is a link from the professional game down to the club game, and that’s how it should be.

It is in Irish rugby’s interest that the AIL is a vibrant element of the pyramid. Both the senior and academy squads in the provinces, not to mention the Irish squad, are littered with players who started playing mini rugby with their clubs and sharpened their development at academy or professional level in the AIL. The clubs are the grassroots of the game. Simple as.

Hence the cessation, more or less, of club rugby for what is likely to be well over a year is being acutely felt by the provinces as well. Bar a few interpro ‘A’ games, fringe and academy players are desperately short of rugby and, as Stephen Larkham admitted recently, this is affecting the players’ fitness and development, which is going to hurt Munster in the long-term. He also noted that it’s denying prospective academy intakes or potential signings any opportunities.

No less than all other team sports at community level, clearly that is not going to change any time soon. When all team sports return it will be a serious cause for celebration, for as much as anything else that will be a clear sign that the country has finally started to win its war with this vicious virus.

And when community rugby does return, the clubs will not only have to be open-minded about breaking with history and custom in welcoming the back in some guise, even in the summer months, but likewise, along with the IRFU and Nucifora, when it comes to the AIL’s future.

Alas, this pandemic has widened the schism between the provincial game and the AIL in that there will have been little or no tangible interaction between the two for over a year, and the events of 2018 heightened the mistrust and ill-feeling between Nucifora and the clubs.

For sure there is a richer conveyor belt of talent coming from the schools in other provinces, especially Leinster

As recently as 2015-16, both Division 1A and 1B each had representation from all four provinces. But in two of the ensuing four seasons 1A has been a Leinster-Munster carve-up, which is not much use to anybody, and last season (2019-20) Ballynahinch were propping up 1A, with three more Ulster clubs in 2B, but there wasn’t a solitary Connacht club in the top two flights.

Buccaneers have dropped two tiers in three seasons to Division 2B while Galwegians, in 1A five seasons ago, have suffered three relegations in five seasons to languish in the fourth tier, 2B, along with Corinthians, Sligo and Ballina.

It’s also hard to credit Ballymena in 2A and fellow former champions Dungannon in 2B, along with Belfast Harlequins, whereas Banbridge and City of Armagh have risen to 1B, but there you go.

In advance of the 2018-19 season, the IRFU increased the number of professional players who could play in the AIL top two divisions from four to six (with a maximum of three forwards) which, as well as making the AIL more relevant, can only increase standards. There is no limit on academy players, who can also play in any division, although clearly UCD and Trinity, both in 1A, benefit the most from this source.

The problem here is that no pro players from Connacht can be made available to clubs from the province as they are all outside the top two divisions.

Viewed in light of all of this, Nucifora’s proposals actually had plenty of merit. They need to be revisited and perhaps tweaked, so as to ensure a pathway to the top tier that everyone can aspire to, while ensuring senior status for the 50 clubs in the AIL.

A top division, or two, more closely aligned to the professional game, would be a huge boost to the club game. In its marketing and presentation, the IRFU treats all five divisions equally bit this could also be an opportunity to spruce up the top flight; market it better; give it its own Youtube channel etc.

Maybe it’s time the top division went semi-pro? Maybe there could be an amalgamation or two for the top tier of the AIL only while retaining separate status, i.e Galwegians and Corinthians competing as the City of the Tribes? Whatever it takes.

This hiatus provides a window of opportunity. But if it’s not grasped now, it may never be.