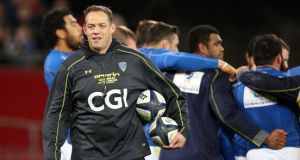 Ulster have announced former All Black Jono Gibbes will join the province as head coach at the end of the season.

Gibbes, currently the forwards coach at French side Clermont Auvergne, has signed a two-year contract at Ravenhill.

He had previously enjoyed a successful period as forwards coach at Leinster, helping the province lift three European Cups during a six-year spell, having joined in 2008.

Gibbes moved to Clermont in 2014 and helped guide the club to the Champions Cup and Top 14 finals in his first season.

Gibbes will be working alongside Ulster’s director of rugby Les Kiss, and Gibbes has said he is one of the main reasons for his return to Ireland.

He said; “The respect that I have for Les (Kiss), as a coach and as a person, was one of my main reasons for making this decision. He really sold his vision of where he wants to take Ulster over the next few years.

“Ulster is a team that I know well, having come up against them on a number of occasions. The Clermont-Ulster games this season gave me an insight into the strengths of the squad and it’s exciting to think that I’ll be part of that environment from next season.

“With six years at Leinster and three years at Clermont in the Top 14, I’ve been afforded many different experiences, working with some very talented coaches and players. I hope to apply what I’ve learned to the role at Ulster and my family and I are looking forward to integrating into a strong community in Belfast.”

Meanwhile Kiss said: “Jono’s CV speaks for itself and I know that he’s looking forward to joining Ulster and working with the team. Jono has vast experience on both the playing and coaching fronts, having worked in many different environments such as Super Rugby, PRO12, the French Top 14 and European competitions.

“Since his retirement from playing, Jono has had an integral role in the coaching teams of two of European rugby’s most successful sides. He was a key part of the Leinster set-up that won three Heineken Cups in four years and he has continued to be hugely successful during his time in France.

“Jono’s expertise as a Forwards Coach is obvious, however his wealth of knowledge in other areas of the game will be really important for us.”

“A review of the coaching structure is ongoing ahead of next season and the appointment of Jono as Head Coach is the first part of that process. A further announcement will be made in the coming weeks, which will focus on getting the right balance in our coaching team.”