Owen Doyle: Breakdown a shambles in Murrayfield comedy of errors 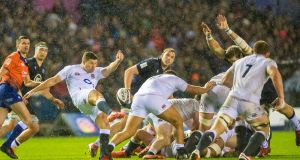 England’s Ben Youngs launches a box-kick against Scotland. The match also saw the employment of the so-called ‘caterpillar’ ruck. Nothing in the law prevents this but something should. Photograph: EPA/STR

Hats off to Ireland, the team and the coaches. It was a controlled and strong performance in all areas – and Wales could not resist it. We can be positive about the future if this becomes the norm.

It would be churlish to offer criticism of Romain Poite, but Ireland will seek clarification of a few scrum issues (notably the first scrum penalty on Ireland’s put-in) and a penalty against CJ Stander which the referee seemed to take a long time to think about. Captain Johnny Sexton, who earlier had been a tad narky, did ask an important question here.

We have to mention the usual ‘chestnut’ of the breakdown, there were a lot more side entry penalties than were actually given. The Frenchman has had a most distinguished career, and is now nearer the end than the beginning. So, not unusually (it happens to us all) he was not as urgent in his movement around the field as he has been. Notably, and amusingly, when asking the TMO for a ruling with “I have no idea”.

Romain and all of the French referees speak first-class English, in sharp contrast with those who try to speak a form of French which is distinctly pidgin.

Over to Murrayfield where England and Scotland played out a production of Shakespeare’s Comedy of Errors in monsoon-like conditions. The ball was so slippery that it might well have been supplied by the soap manufacturer whose product advertising was well placed.

The breakdown was a shambles, even making some allowance for the weather. It is often thus in France’s domestic competition and Pascale Gauzere brought a similar laissez-faire approach to this match. Whenever these two teams meet the post-tackle contest has the potential to produce mayhem, and that’s what happened.

There were some decisions which support my view of the current lack of law knowledge amongst the cohort of match officials:

A Stuart Hogg drop-out went all the way into the English in-goal where it was touched down straightaway. The option of a scrum back on the Scottish ‘22’ was not offered to England. Denied the prescribed attacking scrum, they had to restart into the gale from their own ‘22’.

Small things have a nasty habit of producing nasty outcomes. Didn’t Albert Reynolds say that its just those small things that trip you up?

Next, and Pascale Gauzere is not alone in this: At lineouts a maul was often formed, and he allowed the backs to come up the moment any small forward movement took place. Space is at a premium in rugby, and the backs must stay 20m apart until the lineout is over.

By letting the defence advance too early this very valuable space is crucially cut down. The consistently ignored law, relevant to when a lineout is over, requires that “the feet of all players in the ruck or maul move beyond the mark of touch”.

I repeat – the feet of ALL players. So, it’s not hard to see that the space is meant to be protected for far longer than it is.

Stuart Hogg had another awful goal line moment, this time on his own one. England got a crucial score moments later.

The match also saw the employment of the so-called ‘caterpillar’ ruck. This is where players latch on to their own last man – in single file, when the ball has been clearly won. This extends the physical length and duration of the ruck. The scrumhalf cannot be got at, and it produces more kicking from very slow ball. Nothing in the law prevents this; something should.

Appallingly, bottles were thrown at the English coaching staff – it was despicable. The severest action must be taken, the perpetrators identified, banned for life and face police prosecution. Nothing else will be enough. Is rugby really coming to this point?

In Paris, France and Italy produced a very entertaining if not intense match. Both teams were compliant at the breakdown, not much by way of side entry with a couple of good penalties given. This produced fast ball, and allowed Andrew Brace to enjoy his first Six Nations which he refereed very well.

We saw, though, a try being scored against the base of the post padding, which protrudes into the field of play and on the line to either side of the posts.

Allowing this in law is absurd. It dates back to pre-padding days when the base of the post was effectively on the try line. It’s now impossible to defend. In close “pick and drives” the defenders cannot stand in front of the padding, they’re off side if they do. Standing behind it obviously won’t help much!

So, they can only position themselves to the side from where its not possible to stop the drive. There’s an obvious and easy fix here.

To finish up, let’s look at one of the law trials currently being conducted by World Rugby. It replaces the five-metre scrum for certain infringements. When Welsh centre, Hadleigh Parkes, dived to score but dropped the ball over the line, this trial would have given Ireland a goal-line drop-out.

Similarly, when an attacking ball carrier is held-up over the goal line and the officials cannot decide whether it’s a try or not, it’ll no longer be the logical five-metre scrum but a goal-line drop out to the defenders.

This trial is a direct copycat of rugby league, and allows the defenders to belt the ball down the other end of the field. That’s a very great reward.

I doubt if I’m alone in thinking that it’s far too great.