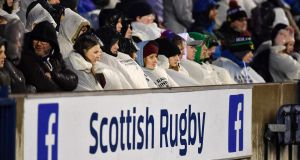 Supporters shelter from the rain during the Six Nations clash between Scotland and England at Murrayfield. Photograph: Getty Images

In August 1990 a retired French nuclear physicist called André Gardes armed himself with a semi-automatic weapon and launched a one-man invasion of Sark. When he arrived on the island he put up a pair of posters warning the residents he was going to take over at noon the next day.

And he would have, if a local constable hadn’t disarmed him by asking if he could hold his gun for a minute. Gardes removed the magazine, handed it over, and the policeman punched him on the nose. The invasion was over. Gardes actually tried again a year later. This time the ferryman recognised him and refused to sell him a ticket.

I was thinking about all this on Saturday morning, while I was eavesdropping on another of history’s great failed expeditions, this one a futile sally north by the two men sitting behind me on the 8.53am from London to Edinburgh. Like me, and almost everyone else on the train, they were on their way to watch the game at Murrayfield. They were on a corporate jolly. They didn’t seem to know too much more about who was playing than what they had read in the morning’s papers but they were bubbling with excitement about their weekend away anyway. Until, as the train pulled into the first stop, the public address told them what was ahead.

The guard spoke about the weather forecast and said anyone who wanted to come back to London the next day should think again because the company would be running an emergency service. There would be only five trains all day and they would take around 10 hours each. The advice was not to travel at all. Anyone who wanted to cut their losses should get off at the next station and talk to the staff about travelling back to London. The lads decided to press on to York, so they’d have time to talk it all through. But you could tell by the way one of them was humming and hawing that he, at least, had already decided what to do.

He couldn’t stay in Edinburgh another day, he explained, because he absolutely had to be back in the office on Monday. He didn’t fancy their chances of finding a cheap seat on a flight, didn’t know if the airports would be closed anyway, and, as for the train, well, the way the guard was talking made the journey sound like a fate from the Book of Revelations. With their enthusiasm now extinguished they put in a sheepish call to the people they were supposed to be meeting, made their excuses, and got off at the next stop. They must have made it London in plenty of time for kick-off, if they bothered watching.

There was salutary lesson in all this for the people running the Six Nations, who are, even now, in the throes of their negotiations with the private equity firm CVC. It wants to buy a 15 per cent stake in the tournament, to go with its 27 per cent chunks of the Premiership and Pro14. The deal is turning on whether or not the Six Nations will let CVC take live coverage off free-to-air TV, away from ITV and the BBC. My colleague Paul Rees reported last week that there is talk of a “hybrid deal” in which one of the three games in each round of matches would be put behind a paywall. I’m guessing it won’t be Italy’s.

CVC did a similar thing when it took control of Formula One. When CVC got into the sport, the BBC showed every race, then started showing half the races, and then, in the end, showed no races at all. It was a similar story in many other countries.

CVC’s motivations are crystal clear. The only thing it is interested in is how much profit it can extract from its investment. Just like Bernie Ecclestone said when CVC finally sold up its stake in his sport, the company is “pretty upfront” about what it does. “They buy and sell companies looking to make a profit.” They made about 450 per cent on their investment in Formula One, partly by loading the sport with debt so they could pay themselves dividends. At the same time they managed to reduce its global audience by about a third. The company which bought them out, Liberty Media, is, unsurprisingly, desperate to get Formula One back on free-to-air.

Right now the Six Nations is the single biggest asset European rugby has, because it is the only event, outside of the Rugby World Cup, that reaches a mainstream audience of millions of casual fans. The commentator Brian Moore touched on this the other day, when he was being criticised for the way he was covering matches. “To those saying my analysis is old-fashioned – it isn’t but it is simple,” Moore wrote. “Know why? Because out of an audience of 7m-8m, all but 1m know very little about rugby and they need simple explanations. If the choice is boring supposed experts and informing them; I choose them.”

Their commitment to the sport is a lot more tenuous than some of the people who run the sport seem to imagine. They won’t follow it to on to pay TV, any more than they will put up with a 10-hour trip back from a match. Because much as all of the rest of us on that train wanted to think the two men ended up regretting their decision, you have to really love rugby to think the match – which we might euphemistically call “one for the connoisseurs” – was worth spending half your weekend squatting on the train floor by the toilet door. And though you didn’t hear any of them say it, there were likely one or two, or even quite a few, people on that train back wishing they had cut out too.