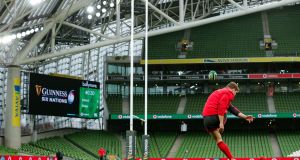 Leigh Halfpenny practices his kicking during the Wales Captain’s Run ahead of the Six Nations clash with Ireland. Photo: Brian Reilly-Troy/Inpho

Kick-off: 2.15pm. Venue: Aviva Stadium. How the follow: The Irish Times liveblog will begin at 1.45pm. On TV: Live on Virgin Media One and ITV.

Wales will aim to stay firmly in contention for a second successive Six Nations Grand Slam this weekend — and not be blown off course by Storm Ciara.

Heavy rain and strong winds are set to arrive in Dublin on Saturday afternoon, with gusts of up to 50 miles per hour predicted during the Aviva Stadium clash.

Wales’ degree of difficulty is acute enough without the weather playing its part, having not won a Six Nations game in Dublin since 2012.

Ireland were also the last team to beat them in a Six Nations fixture, claiming a 37-27 victory two years ago.

Wales, though, have reeled off eight successive victories in the tournament since then, including an emphatic Grand Slam-clinching success in Cardiff last season.

“Hopefully, we are not talking and dwelling too much about the weather after the game,” Wales captain Alun Wyn Jones said.

“We will wait and see. It is very easy to say we are going to do this, do that, without playing the environment.

“We are not paid to be robots, we are paid to make decisions and adapt to whatever and problem-solve. You’ve got to be able to play both (types of game).

“There is the platinum game, and it is about being able to step down sometimes and adjust to the bronze game. You have to have A, B and potentially C at times.

“Everybody likes to go out and have a bit of running rugby, but at Test level it’s what suits your opposition first, and then the variability of the environment, secondly.

“Coming out here, it’s a great place to play rugby in a tournament game in particular.

“We’ve had a mixed bag in recent years with a few friendlies and warm-ups, but coming out here — there is no truer test.”

Wales have only won three Six Nations games against Ireland in Dublin since the tournament began 20 years ago.

And head coach Wayne Pivac, who takes charge of his first away-day assignment on Saturday following successes against the Barbarians and Italy, knows that a tough challenge awaits.

“They’ve got a good set-piece which puts pressure on. They get to the sidelines and get the drive going, and then it’s deja vu.

“We’ve got to make sure that we are disciplined with the physicality that we bring so that we don’t give away penalties.

“They (Wales players) know that if they win this, they get a weekend off and then a home game to hopefully get excited about. It’s a very important one, and the players know exactly what is at stake.”

Pivac has made a solitary change of personnel from the Italy encounter, handing in-form Saracens centre Nick Tompkins a first Test start.

And while Wales brushed Italy aside 42-0, their scrum did not always operate at maximum efficiency.

“We’ve looked at the scrum and reviewed it,” Pivac added. “We probably didn’t agree with all the decisions there.

“A lot of those calls, you can look at an elbow or a bind on the loosehead or look at the bind on the tighthead. We see one thing, the referee sees another at times.

“That’s just part and parcel of the game, but we’ve worked very hard on the scrum this week because we know there will be no step back.”