Is rugby union struggling to balance beauty with the beast? 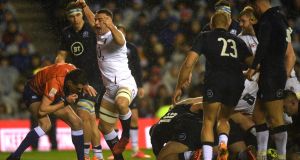 Few sports tread the fine line between love and hate as precariously as rugby union. It is part of its attraction: beauty and the beast occupy the same arena, passion and restraint are essential requirements. What has traditionally bound everything together is the realisation that, ultimately, it is a game that relies not only on the “rugby” for its enduring appeal but the collective power of “union”.

Essentially it boils down to a single word: respect. The code used to be simple: regardless of the intensity of the contest, be respectful to the referee, your opponents and the game itself. Increasingly, though, rugby is drifting in the opposite direction. Abusing the goalkickers, gesticulating at officials, booing players from a rival nation off the bus and blaming the media have become an all-too familiar part of the Six Nations backdrop.

It would be simple to file all this away under the heading “modern life” and criticise keyboard warriors on Twitter for helping to coarsen the atmosphere around top-level rugby – simple but a shade too convenient because it is about time rugby woke up to the self-inflicted damage being done by some within the game who should know better, not least coaches who overlook the link between their pre-match rhetoric and deteriorating relationships elsewhere.

When Eddie Jones talked about inflicting “absolute brutality” on France and dismissed the Scots as “niggly” one can be sure some of his employers at the Rugby Football Union were among those rolling their eyes. It helps to fuel the kind of atmosphere that, along with the wind and the rain, made its presence keenly felt at Murrayfield on Saturday when England were jeered on arrival and their captain Owen Farrell was booed when he kicked for goal.

Friendly rivalry is fine; centuries of history cannot be entirely rewritten, after all. But as the former Scotland international Peter Brown wrote in a thundering letter to the Times last week: “Hate is for terrorists. Not rugby players.”

Disliking someone based purely on their nationality is the most blinkered of traits; such intolerance is nothing to shout about. Stranded in Edinburgh by the weather over the weekend three of us were scooped up by two extremely kind rescuers, a Dutchman living in Ascot and a South African resident in Singapore. A seven-hour shared car odyssey and hundreds of miles of rugby chat later, it felt as if we had known each other for years.

Maybe it would help if more players were also encouraged to see the benefits of engaging with the media, to look past the occasional wince-inducing headline and recognise the opportunity to project themselves, both as athletes and as human beings. It might give some of them a more rounded perspective.

There is a massive amount to admire about Ellis Genge: his talent, his dynamism, his honesty and his refusal to be constrained by the perceptions of others. But when he dismisses “the sausages” who aired uncomplimentary views about England after the French game only to say nicer things post-Murrayfield, he is straying on to trickier terrain. Does that mean only he, Ellis, can tell it like it is? Is he saying the former internationals who were critical of the Parisian performance know nothing? Honesty at the top level is a two-way street.

At times it is easier said than done. One minute players are expected to be singing their hearts out during the anthems, the next to be completely calm. Or to smash their opponent into the middle of next week before getting up and calling the referee “sir”. It must occasionally be galling to listen to a coach or captain whose back you were protecting until recently delivering home truths from a well-remunerated pundit’s chair.

Maybe there are just too many podcasts, with too many babbling voices competing to be the noisiest, most controversial or the most indiscreet. Either way, there is way too much impatience and intolerance swilling around which, in turn, threatens the umbilical cord linking the game with its public.

Johnny Sexton is surely destined to become the best referee in the world, so often does he lecture those mere mortals currently trying to do the job. Jones writes disparagingly in his autobiography about the media “lunch club” and their “astounding vanity” without bothering to name names. Finn Russell savages Gregor Townsend’s coaching regime mid-tournament, in apparent retribution for the lack of understanding he believes has been shown towards him. Can they both be right? It is that same blurry fine line again, this time between free speech and fair comment.

No one wants rugby to become one big ocean of blandness. Then again, it is already tough enough not to require unnecessary bile and spite. Nor is it about people trying to cling to some absurd notion of moral superiority over other sports, as if that were ever true. It is more about people recognising they do not reside in some kind of bubble. Silence for kickers is fine but not if they take forever lining it up. If you make disparaging remarks about a rival nation at a press conference, do not then complain when someone abuses you in the street or on a train.

The presence of the remarkable Doddie Weir at Murrayfield was a timely reminder of what a real rugby ambassador looks like. If only out of respect for inspiring people like him, the trash talking has to stop. - Guardian