Oli Jager: ‘For sure I have thought about putting on a black jersey. It would be cool’ 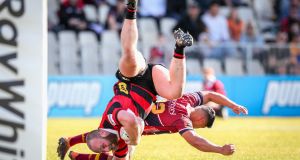 False narrative: Oliver Jager was lured away from the land of his birth to pursue the All Blacks dream.

In the summer of 2013, a 17-year-old realised he was at least 12 months off entry into Leinster’s sub academy, so he sourced a job on a farm outside Auckland to “play a little club footie”.

Harm Jager, his 6’ 10” Dutch father who played international waterpolo, got to talking with Trinity director of rugby Tony Smeeth about an alternative route, via the ultimate finishing school for any aspiring professional.

The Canterbury Crusaders have an international programme.

New Zealand is where John Hayes became a prop. It’s where Martin Johnson was almost captured by the famous black strip, even representing the New Zealand under-21s.

Smeeth was hoping that Canterbury would mould Jager into whatever they could and present a late blossoming player for the Irish system. But one Christchurch winter is ticking into eight and a settled existence confirmed by the Crusaders signing him until 2022.

They are betting on Jager to eventually turn the screw on Nepo Laulala, the Samoan-born brother of former Munster centre Casey Laulala, who was starting tighthead for the World Cup semi-final defeat to England.

Owen Franks, the 108 Test veteran, moved to Harlequins having been overlooked by the All Blacks selectors, a decision that signalled a change in style: Laulala, Angus Ta’avao and Ofa Tu’ungafasi are humongous yet mobile props.

“Watching them [in Japan] drove something in me: that’s what I want to do,” said Jager over Zoom last Thursday. “This has grown out of me through the years, it wasn’t always there, I came over to play some footie and see how things go, have a few beers in the club rooms.

“But seeing them in the World Cup lit a fire in me to get better. For sure I have thought about putting on a black jersey. It would be cool. Can’t say many people from Ireland have done it.”

None since Donegal man Dave Gallaher led the “original All Blacks” on tour of the northern hemisphere in 1905.

The new contract backs Jager, come France 2023, to be following in the footsteps of Carl Hayman and Franks, the previous world-class tightheads produced by the same academy.

Ryan doesn’t sound like the type of person to fling around the idea of greatness.

“This big Irishman kept hanging around our scrum sessions,” Ryan continued. “To play tighthead prop we had to completely rebuild his whole body, which he has done, but he has come a different route to most tightheads.

“He made big sacrifices. I know he has thought through his training that it is not worth it, but he stuck at it.”

“It was hell,” Jager confirmed.

On arrival from anchoring a Blackrock pack that included Munster’s Jeremy Loughman and Ulster’s Nick Timoney to a Leinster schools senior cup title, Jager tried to reinvent himself as a number eight. The only place in the academy was at tighthead.

“That ended the idea of ever escaping the frontrow.”

Of course the “big Irishman” is plenty more besides. Half Dutch, born in London, the family hub nowadays is Abu Dhabi due to his mother Therese’s job with Etihad.

“Yeah, I’ve got a bit of a multi-cultural family. A job came up for my mum when I was in fifth year to go over to Abu Dhabi as station manager, which is quite a big role. She takes care of over 400 flights a day, coming in and out. It was a big decision for her to go over on her own for a couple of years.

“I only have cousins, uncles and grandparents left in Ireland. Mum is from Kilcullen originally.”

“I definitely get the size off dad but I do have family members on my mum’s side in the army.

“There’s a big story that he doesn’t like to talk about. He played waterpolo for Holland. I can’t remember which Olympics – might have been ’80 or ’84 – but he was in the extended squad, so if someone got injured he would have been called in.

“Sadly he never went to the Olympics but he was on the cusp of going, which is pretty cool in itself.”

A lazy comparison, but Oli Jager is on the cusp of becoming an All Black. It is simple arithmetic. Canterbury plus Crusaders equals international rugby.

Just like Blackrock plus Leinster equals an Ireland jersey. Garry Ringrose and James Ryan currently lead the 16 players who turned professional after the 2013 Schools Cup final but only one of them featured during the 2017 Lions tour.

“I always wanted to be a professional rugby player,” said Jager. “If I had got an academy place in Leinster I would have stayed. They wanted me to have another year of schools rugby, as I was young enough to play senior cup again.”

Chance for another medal alongside new recruit Joey Carbery?

“I had my medal and I also wanted to finish in my own year.”

That summer the Leinster academy contracted loosehead prop Peter Dooley from the youths system. Tadhg Furlong was about to be promoted to the senior squad while Loughman and Andrew Porter were well mapped.

But Munster, Ulster and Connacht all missed the boat. One of them – we guessed Ulster but it could easily have been Munster – recently made an offer Jager felt he had to refuse.

After Daniel Brennan chose Montpellier over Munster in 2018, that’s two giant Irish tightheads to slip through the IRFU net.

“There was one team in Ireland, it’s probably best not to say who it was, they seemed pretty interested in me, not the IRFU themselves, and a couple in Europe but the Crusaders were always going to be number one.

“If I had left it would have been for the team in Ireland but it didn’t feel like the right time, given what the Crusaders have done for me. I want to continue my journey here. I still have goals and aspirations.

“In my first year at Super Rugby I was only 113 kilos. It was almost a blessing in disguise that the next year I needed shoulder surgery after banjaxing it in South Africa.

“Don’t know how I did it, but I put on 15 kilos in a year – it was hell – but that accelerated me to the body I needed to have.

“Hopefully the [All Blacks] opportunity comes one day. I will be ready, if it does come, but I am trying to work myself up to that level.

“All in all coming down here made me a better player than I could ever be.”