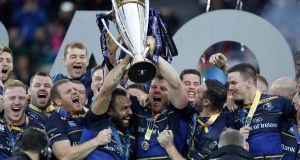 About eight minutes into the 2014 final of what was then known as the Rabo Direct Pro12 between Leinster and Glasgow, Brian O’Driscoll’s farewell game was coming to a slightly anti-climactic ending due to a calf injury.

The day, six years ago yesterday, was no less glorious than any of the sun-drenched weeks of late. The RDS was full to the rafters (sigh!), albeit the crowd were about to complete what had perhaps been the longest goodbye of them all.

Legend has it that as Ian Madigan prepared to come onto the pitch in place of The Great One, he turned to one of the backroom staff next to him and said: “Wait till you hear the cheer for me now.”

Still, it would prove a fitting farewell for both O’Driscoll and Leo Cullen, as the pair jointly lifted the trophy on the day that the latter also played his last game before retirement.

Leading 14-12 at half-time, Leinster ensured a carnival-like day by scoring 20 unanswered points in the second half against a dangerous Glasgow side who had lost at the RDS in the previous two semi-finals and would win the title the following season.

Zane Kirchener, in what has to have been his finest game for the province, scored two tries and made the break and gave the try-scoring pass for Shane Jennings, while Jimmy Gopperth landed two penalties and converted all four tries (Gordon D’Arcy scored the other).

Yes there were three relatively fallow years, featuring three semi-final defeats. Yet despite losing those two influential figures, on top of Joe Schmidt a year before, and others along the way (not least their greatest ever import, Isa Nacewa), the success has remained fairly seamless.

They’ve since added another Heineken Cup in 2018 to go with two more Pro14 titles, thus making it 10 trophies in ten years, and it’s worth noting that they’ve also lost one European final and four league finals in that time.

At the time of the coronavirus outbreak, with 19 wins out of 19, Leinster were again comfortably on course for a 10 home semi in 11 years and they’d won eight of the previous nine.

They’d also set up a fourth home Heineken Cup quarter-final in a row and eighth in the last 11 seasons, and never had there been a more mouthwatering one – a revenge mission against the disgraced reigning champions.

The first wave of success had been founded on the drive of Michael Cheika and the backing of the Leinster hierarchy as they supplemented a golden generation, especially of backs, with the signings of Nacewa, Rocky Elsom and CJ van der Linde in addition to Chris Whitaker and Stan Wright, and the hard edge provided by the Leicester-influenced Cullen and Jennings.

The second quickly followed, masterminded by Schmidt and a group of largely unchanged but now proven winners, supplemented by Nathan Hines and Brad Thorn, and the arrival of Eoin Reddan.

Arguably the third wave of successes, overseen by Cullen (now surely the single most influential figure in the history of the province) and Stuart Lancaster, has been the most impressive of all given how changed the 2018 Heineken Cup winners were compared to the previous three.

With the emergence of Tadhg Furling, James Ryan, Dan Leavy, Luke McGrath, Garry Ringrose and Jordan Larmour and co, Leinster reaffirmed their standing as the best producers of indigenous players of any team in Europe and perhaps the global game.

An endgame of sorts to the 2019-20 season may still apply and allow Leinster to maintain their voracious pursuit of silverware. But if there is to be a finale to the season, it will almost certainly be played without crowds which, in terms of gate receipts, is sure to cost Leinster in excess of €2 million.

On top of this came last week’s announcement that Leinster will not be putting their season tickets (which numbered 12,000 last season) up for sale, a move which Mick Dawson described as a “significant” blow to the province and their sizeable fan base.

Hereabouts, we have described Leinster as akin to the Ajax of football, especially in the mid-90s. It’s a valid comparison in many ways. Neither could be considered to be financially more powerful than their European rivals, but through clever talent identification and coaching, they could outsmart heavyweight rivals and conquer the continent.

Alas, as Ajax then discovered, being the prime developer of home-grown talent also makes your products the most coveted. And when one exceptional event comes along, albeit the Bosman Ruling pales into global insignificance compared to the coronavirus pandemic, that can also leave a home grown talent pool more vulnerable to the vultures out there.

This is not meant to be alarmist. Leinster’s production line should stand to them in many ways, particularly if next season proves to be more congested than others and provincial/club games clash more often with international windows. And, however vulnerable they might be too the vultures in the new world order, the same has to be said for Munster, Connacht and Ulster. It’s just that the financial repercussions of this pandemic are more likely to hurt an Irish province than, say, a Racing, Montpellier or Toulon or a club backed by a private owner.

Admittedly the same fears must exist in Wales after reports over the weekend that the WRU is to cut funding to the four regions from €30.25m to €3.36 over the next year.

There is a part of me, both on sporting and political grounds, which admires an Irish system that is not dependent upon multi-millionaire benefactors. Add in the vastly greater TV deals for the Top 14 and Premiership and in many ways, all the more so after you see what Saracens were up to, what Leinster (and the other provinces) are doing defies financial logic.

It’s just things are going to be very different henceforth and you hope that, ala football, the odds aren’t further stacked in favour of those with the biggest wallets and egos.