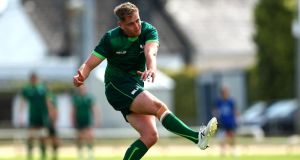 After upgrading six of their academy players to full contracts, Connacht remain on the look-out for a couple more additional acquisitions to the four already signed to offset the dozen players they have released or have moved on.

“We’re still waiting to see if we can add a couple more,” said Connacht coach Andy Friend. “Ideally we don’t want to have less numbers next year but we’re just waiting for things to start moving again.”

Three of the six players promoted from the academy are homegrown players from the province, namely Niall Murray, Colm Reilly and Seán Masterson, while Conor Dean, Jordan Duggan and Peter Sullivan were brought into the system from Leinster.

Like these six, new signings Sammy Arnold, Conor Oliver, Oisín Dowling and Jack Aungier will also be eligible for any potential revised ending to the 2019-20 season. Connacht are due to play Ulster and Munster at the end of August.

Murray, a 20-year-old lock who is also a product of Buccaneers RFC, made his professional debut in December when coming off the bench in the victory over Gloucester in the Champions Cup, before his first start against Leinster during the Christmas interpros.

Murray was also a member of the Ireland under-20s squad for the 2019 Six Nations and World Championships. His younger brother Darragh, also a lock, was on the Connacht under-19 team which won the interpros last season.

“He’s a very good young player from a good sporting family,” said Friend. “ Because he’s tall and lean there’s a bit of a narrative out there that he may not be physical enough. Mate, he’s very physical and he’s very smart too. He’s a good footballer, moves well and a very, very good lineout player defensively.”

Reilly, a 20-year-old scrumhalf, has represented Ballinasloe RFC and won a Connacht Senior Schools Cup with Garbally College. He also featured for the Ireland under-20s team of 2019 with Murray, when he came off the bench in the final game against Wales and scored a long-range try with a dart from the back of a ruck.

“A very talented footballer too,” said Friend. “He had a shoulder injury this year so we didn’t see a lot of him but we’ve got high hopes for him. He’s a quiet bloke but he’s very tenacious and so you wouldn’t hear him but the next minute he’s doing something special. He reads the game very well.”

The 22-year-old Masterson from Westport, made his senior debut in the Pro 14 victory over Treviso, when replacing his older brother Eoghan, and also featured off the bench against Leinster.

“He’s an abrasive backrower,” said Friend. “He can play ‘6’, he can play ‘8’ and you could probably play him at ‘7’ too if you wanted to. He’s physical and aggressive and gives everything he’s got every time he’s on the football.”

Dean, the 22-year-old son of one-time Irish outhalf Paul, made his senior debut in Thomond Park against Munster in the final game of the 2018/19 Pro 14 regular season, and impressed for the Connacht Eagles in the most recent Celtic Cup campaign (when they won five of their seven games).

“He’s very, very good at taking the ball to the line,” said Friend. “So he’s probably a little bit different from what we’ve got with Jack [Carty] and Conor [Fitzgerald]. Both of those blokes have very good kicking games. Deano’s got a very good running game and just sees the space. He has a very nice weight of hand and can put blokes through holes, so I think he’ll be a neat addition for us.”

While Dean is a product of St Mary’s, the 22-year-old Duggan is a prop who played for Naas RFC and has been capped at Ireland under-19 and under-20 level. He also played for Ireland at the Under-20 World Championship which also featured Masterson, Dean and other Connacht team-mates in Paul Boyle and Oisín Dowling.

“He’s a beast of a man,” said Friend of Duggan. “He went away with Connacht to Boston last season, had a very, very good first game and then in his second game he ruptured his ACL. That’s why we haven’t see him this year, but he’s worked really hard to come back from that and we’ve got big hopes for him. He’s an exciting young player.”

Sullivan’s form with Lansdowne saw him join the Connacht academy last season, and his form with the Eagles has seen him promoted to a senior contract. “Pete is a big-bodied, physical aggressive winger. He’s just a big powerful man who will be a great addition to us,” said Friend

Connacht academy manager Eric Elwood says it is a proud day for the players. “It has been a pleasure to watch the players develop and grow over the years and we wish them well on the next step of their journey in their rugby careers.”

“It’s particularly pleasing to see two more local lads come through the grassroots programme, which is a testament to the great work being done at all levels at Connacht Rugby.”