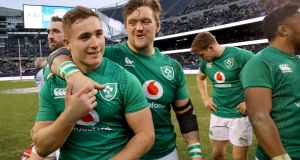 Andrew Porter celebrates with Jordan Larmour after the win over Italy at Soldier Field in Chicago in November 2018. Photograph: Dan Sheridan/Inpho

Just when we were getting used to tropical Ireland, and this being our first of three weeks’ ‘holidays’, the weather turned. Oh well, with all our suntans you wouldn’t need to be going away. It also might keep a few people inside and we probably needed a bit of rain anyway.

At least we can enjoy a small bit of downtime and get a few jobs done without having to worry too much about the scheduled training. I’ll keep myself fit, but I’ll keep myself sane as well.

Monday is the next phase when the travel limit is extended to 20k, so I’ll try to see if I can find a few things to do. I think Dublin Zoo is open. I haven’t been in years but I think my girlfriend, Elaine, would like that. She’s been working from home as a senior executive for Hostelworld.

I can find a few new walks for our dog too. We have a beagle. My dad, Ernie, stipulated that if we got a dog he would name him and Leinster had just won the Heineken Cup in 2009 under Michael Cheika. So the dog is called Cheika! Checks’ legacy lives on.

Cheika is very well trained, the dog obviously, but even when he’s on his walk he just wants to sniff everything, which is tough. He’s not like a golden retriever you can let off the lead and who will still walk beside you most of the time.

Beagles are hunting dogs so it’s their instinct to sniff around. Cheika slipped out of his lead one day and I had a chasing game with him for, I’d say, about five kilometres. Good training!

He’s nearly 12 now but still acts like a puppy. But he’s almost worn out and fed up with all the walks he’s been getting. Ernie and my two sisters, Leigh and Erica, have been taking him for walks as well. He won’t know what hits him when everything goes back to normal.

Even Ernie is starting to bring him on the odd one. My dad was used to having working dogs on his home farm in Clonegal, in Carlow. As a kid I spent most of my summers down there, helping out around the farm with the sheep. I think that’s where I learned how to tackle. My cousins were all into rugby as well and taught me how to tackle sheep when we were gathering them up.

My dad is one of 10, so most of our uncles and aunties are living fairly close to each other, but I haven’t been down there since January.

I wanted to be a farmer when I was younger. It put me through some good honest work. But then I chose rugby, or more accurately rugby chose me. I played through school at St Andrew’s and then at Old Wesley, but it didn’t hit me that I wanted to be a rugby player until I made the Ireland under-20s.

By then I’d long ago discovered my passion for music. Wherever I go my music usually comes with me – walking Cheika, working out in the gym, doing jobs in the house and when I’m driving.

My tastes evolved over time. I would listen mostly to heavy metal music. Metallica would definitely be at the top, and then I go in to heavier stuff with Slipknot, Slayer and Pantera.

I suppose my tastes would seem unusual to some and there’s not many of us, but I’m not alone. This very week last year I was at Metallica in Slane and I met Michael Bent there. Benty is big into Metallica and so is Devin Toner. I was nearly emotional hearing Metallica playing. We were up at the front too and James Hetfield, the lead singer, threw a load of his guitar picks into the crowd afterwards and I caught one. So that was the day made!

I went to see Slipknot in the 3Arena last January. Incredible. I saw Dev there as well. We have very similar tastes, in food and music. Little and Large.

My agent Niall Woods got me tickets for Slayer in the 3Arena in November 2018, but my sister, Leigh, got the nod for that one and went with her fiancée, Pearse, as they like that kind of music as well and Ireland were playing Italy in Chicago. Can’t complain. I missed it for something a bit better! It’s not often you can say you’re missing a concert because you’re playing rugby for Ireland in Chicago.

I think I do have eclectic tastes though. You have to have in the Leinster or Irish squads. Cian Healy and James Ryan are generally the main two in charge of the music on the team bus, in the team room or at end of season parties. I wouldn’t be allowed anywhere near it.

It’s okay. They’ve brilliant taste in music. Sure Church used to be a DJ. He likes his techno, but he loves his Christy Moore as well. Christy would be the bus tunes a lot of the time. I love a bit of Christy. It’s good to listen to an incredible artist like that, especially as we’ve been lucky enough to have had Christy come into camp. That makes the connection stronger.

I’d listen to anything really, whatever mood I’m in. I like a bit of classic rock as well, like Lynyrd Skynyrd, Neil Young and The Rolling Stones.

If I need to get up for something I’ll put on my headphones and maybe throw on Metallica’s Master of Puppets. That’s my favourite track of theirs. It calms me down as well. It soothes me, eases the nerves before a game by not thinking about it too much. It’s multi-purpose.

I love to have my music on if I’m in the gym. That’s another thing I’ve been doing up at the new house, playing heavy music over the speakers in the back garden.

I hope the neighbours have a similar taste in music.