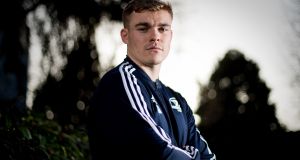 Garry Ringrose: “It was some year [2018] for a lot of us. It’s what you aim for every year, but as I learned pretty quickly the following year it doesn’t always shape out that way.” Photograph: Lazslo Geczo/Inpho

Garry Ringrose exudes a certain calmness and level-headedness. He has a good work-student-life balance and comes across as someone with an equally even-handed outlook on the game. But, no less than the rest of us, if only occasionally, he can have his demons too.

For someone whose performance levels are so consistently good, there was a very rare off-day in Leinster’s Heineken Cup final defeat last year by Saracens, when Ringrose had a kick charged down and cut back inside with numbers outside early in the second half.

“In the bigger picture I don’t think we were the better team on the day and, from my own perspective, I didn’t play well that day. So it was a double whammy in that we lost and I didn’t give a good account of myself.”

In the ensuing week leading up to the Pro14 semi-final against Munster, he admits: “It weighed down more heavily than any other game, for some reason. I’d been involved in losses and disappointments, because that’s the nature of it all but I struggled to prepare for Munster. I just couldn’t shake the defeat off. I kept thinking ‘okay, tomorrow will be better’ but when it got to Friday it was like carrying a weighted vest around.

“You narrow your focus when it comes to the day before the game when the only thing you’re thinking of is the next day and you relax and switch off from anything else outside of it. That’s how I’d approach it.

“But I couldn’t stop thinking about the Saracens defeat. I said ‘I need to sort this. I can’t carry this tomorrow’. So I met Enda McNulty and had a good chat with him. It was a 30/40 minute meeting but I came out like a new person and since then it hasn’t been an issue because I know how to deal with it a little better. So despite losing, I think it was a valuable week as it taught me lessons about myself.”

Demons exorcised, a week later Ringrose pounced on the wildest spinning top of a rugby ball he’s ever likely to see in the win over Glasgow in Parkhead and also made the game’s most important defensive play early in the second half.

There have been other transformative weeks in his life.

Back in his transition year in Blackrock College, Ringrose and one of his current housemates chose Marino School in Bray for their pastoral placement. A school for physically and mentally challenged kids, it was a long way in every sense from their Williamstown rugby nursery and the week made a profound impact.

“The two of us still talk about it today, how powerful that week was, and how it made us appreciate how fortunate we are. It was only a brief snapshot but after that week I knew that I would always help in any way I could people who maybe weren’t as fortunate.

“Then when my rugby career started building a bit of a profile I remember saying to Niall [Woods] and Gemma [Kenny] in Navy Blue Sports, I’d love to find a charity partner that does similar work.”

Subsequently exposed to the work of LauraLynn as Leinster’s charity partner, he became an ambassador for the Children’s Hospice last year.

LauraLynn receives no direct Government funding and must raise €4.6m this year alone through fundraising but are projecting a loss of up to €2.5m this year and Ringrose says fund-raising will be “a constant battle”.

Ringrose, who has also used this hiatus to catch up with his studies (Business and Law), clearly understands that this rugby lark is a shorter career than the one he will be embarking upon when it’s over.

“Yeah, it’s a harsh reality, but that’s the case.”

That said, on hearing Dan Carter is joining the Auckland Blues, Ringrose said: “Jeeze, if he’s going at 38, there’s hope for the rest of us”.

As with his teammates, Ringrose acquired equipment from Leinster in converting a living room into a gym. He also lives within 2k of his old school. It was there that his father converted from the back-row to scrumhalf (he was an unused replacement in the 1979 Leinster final) but his career was ended by a life-threatening punctured artery suffered playing for Blackrock in Stradbrook.

Even Ringrose was taken aback by stories about that day when they came up recently.

“It was a reminder as to how good a story it is; getting read his last rites and all that. They were trying to sneak my mum into the hospital to see him, but it certainly strengthened the realisation that rugby can be taken away pretty quickly.”

He also credits his mum for her prowess across a range of sports.

“We always say I got my ability from my mum’s side. She was always naturally athletic. I think that’s where I got the hand-eye co-ordination.”

Ringrose too started out as a scrumhalf before a shift to centre, via fullback, saw him break into the first team, and he credits the USA Eagles outhalf AJ MacGinty for career-changing advice, also in his transition year.

“I was dropped to the Colts team that he was coaching at the time and he said to relax and enjoy the game, and to trust my ability. He reshaped what I thought was being successful, ie getting selected on the team, to actually start enjoy playing the game and challenge myself in training and in matches.”

Cue an 80-metre try and 18-point haul against St Michael’s in a Schools Cup final featuring a full dozen future professionals. Ringrose missed just one kick in that four-match run to the trophy.

“I’ve managed to play with some pretty good goal-kickers so I probably don’t practice it as much as I should but it’s certainly there in the locker.”

He has never taken a kick for Leinster, but is one from one for Ireland- a conversion against the USA three summers ago.

Ringrose initially didn’t make the Leinster academy, but his under-19 and under-20 performances, including a stand-out campaign in the 2014 IRB Junior World Championship, earned him spots in the sub academy and one year in the full academy.

Although the 2015-16 season was a difficult first campaign for Leo Cullen, Ringrose (then 20) was a huge beneficiary of his faith in young players. He started 20 of 22 games and was promoted to a full contract.

Ringrose reckons he’s been lucky with his teammates and coaches, and references the recently retired Fergus McFadden.

“He was incredibly helpful, especially early on. When I made my debut for Leinster on the wing, he was on the other wing. The list of guys goes on and on. I don’t think I’d have progressed like I have if it wasn’t for them.”

Flourishing further under Stuart Lancaster and Joe Schmidt, Ringrose gradually became the starting 13 for both province and country. Despite operations on both shoulders after the 2017 summer tour, and an ankle injury midway through the following season, Ringrose played the final two games of Ireland’s Grand Slam (scoring a try in the Twickenham coronation) and every minute of the five knock-out games in Leinster’s double. Then came the November 2018 win over the All Blacks, having been an unused sub two years previously in Chicago.

“It was some year [2018] for a lot of us. It’s what you aim for every year, but as I learned pretty quickly the following year it doesn’t always shape out that way.”

Which, of course, brings us to the World Cup.

An exceptional runner with the ball, he’s also a fine defender, but then there’s statistics, damned lies and statistics. In the World Cup win over Scotland, he was down for three missed tackles, but they were all good reads, forcing the opposition carrier into traffic.

He still regards that Irish side as “an incredible team” that “came up short” come the World Cup.

“Hindsight is 20-20. You’re constantly trying to evolve and maybe what worked in 2018, other teams got stronger in some areas more than we did. Some of our strengths prior to 2019 weren’t as effective in 2019.

“New Zealand played unbelievably that day in the quarter-final. I’ve watched the game back a couple of times just to learn from it, and they negated some of our opportunities. But were there other opportunities? Yes. So that’s where the learning element comes in and how we keep evolving.”

“That’s where we’re going to move forward under Faz. I don’t think it’s about throwing out what went before. It’s building as a team. It’s not about reinventing the wheel.”

He cites Ireland scaling the world rankings before the World Cup for the first time ever.

“That was under Joe as the coach and on a personal level I learned so much from him, on how he sees the game and his IQ. I credit him for helping me evolve as a player, because that’s what I did under him, and now I’m excited for the opportunity to continue that growth because there’s plenty of it to be done still.”

He knows how fortunate he is to be doing what he’s doing. He knows there’s a longer career after this one. But when rugby returns he’ll be a player on a mission.

For more information and to make a donation head to www.lauralynn.ie/donate