English rugby has no plans to introduce the Rooney Rule 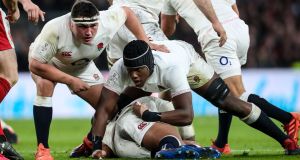 England rugby player Maro Itoje has spoken in the past about how he has been subjected to racist abuse. Photograph: Inpho

The English Rugby Football Union has no plans to introduce the Rooney Rule to its existing recruitment policy despite calls from senior England players for more opportunities for black and ethnic minority coaches.

Both the English Football Association and the England and Wales Cricket Board have a commitment to the Rooney Rule – which guarantees that at least one BAME (Black, Asian, and minority ethnic) applicant will be interviewed for future jobs – but the RFU does not intend to follow suit.

English Premiership Rugby has adopted a similar stance, leaving the choice up to the clubs, but Paul Hull is the only black director of rugby or head coach in the history of England’s top flight, having been in charge of Bristol between 2009 and 2011.

Collin Osborne enjoyed success with Harlequins during his 20 years with the club, acting as skills coach when they won the Premiership in 2012, but he left the role two years ago. At present the New Zealand-born Samoan Pat Lam is the director of rugby at Bristol but it is believed Joe Shaw, the Saracens skills and attack coach, is the only homegrown BAME senior coach currently employed in the Premiership.

In a wide-ranging interview this week, the England prop Ellis Genge detailed how he has been subjected to racist abuse while on international duty and highlighted the need for more diversity at elite coaching level. His England teammate Maro Itoje has also spoken on the subject in the past.

“The issue in rugby is it has been a white man’s game for a number of years,” Genge said. “There’s not really many black coaches or ethnic coaches, especially here in England. I would love to see black coaches thriving in this game. Me and Maro have spoken about it before.”

The RFU privately believes that its focus should be on increasing diversity at grassroots level, pointing to its Project Rugby and All Schools programmes. Hull, however, believes the Rooney Rule has its merits.

“I think it’s positive,” he said. “It’s not saying that you are automatically going to get the job, but you are given the opportunity to interview. Even if the person doesn’t get the job, as we all know, it’s not just about having the credentials, it’s about honing your interview skills, knowing what that environment is like and understanding that process.”

While more than a third of last year’s Rugby World Cup squad came from BAME backgrounds – and the head coach, Eddie Jones, has Japanese heritage – there is a dearth of homegrown black and minority ethnic coaches employed by the RFU, with James Bailey leaving his role as England women’s sevens coach last year.

Furthermore, there are no BAME members on the 14-strong RFU board and of the 55 RFU council members, the World Cup winner Maggie Alphonsi is the only black representative. An RFU spokesperson said: “The RFU council has a diversity and inclusion task force set up with the aim of attracting at least 30 per cent of new members with protected characteristics including race. This remains an important area of focus.”