No wins since 1983: will Scotland end their Twickenham hoodoo? 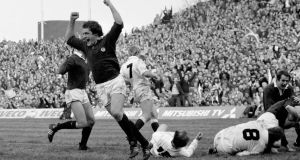 If there is a palpable spring in Scottish steps as they head to Twickenham, a buoyant Six Nations campaign now faces its ultimate test. The home of English rugby has become such a wearily familiar graveyard for Scotland hopes that it almost defies rugby logic to advance a case for an away victory.

Yet you will struggle to find a Scottish supporter who won’t tell you this side has at least a puncher’s chance of ending the longest winless run – 34 years, 16 matches – of any country at a rival’s home in the entire 134-year history of this championship, from Home Nations to Five Nations to Six Nations.

It wasn’t always like this. The Scots won every game they played in the capital – at Richmond and Blackheath in the two decades before Twickenham opened its gates for the first time. However, since their first visit to “Headquarters” in 1911, the record is a paltry four wins from 47: 1926, 1938, 1971 and 1983. Generations between drinks.

None of the current squad was born the last time Scotland won at Twickenham. Even arriving at the stadium will be an experience for some of the first-timers in dark blue.

“You had a window into how some of Britain’s elite lived,” says the former Scotland hooker Gordon Bulloch. “You come through the west car park and see all the top-of-the-range Range Rovers, and the dress code certainly isn’t jeans and T-shirt. Going through those big gates, it’s always a bit of an occasion.”

Jim Telfer’s pre-tournament admission that he hated Twickenham’s “intimidating atmosphere”, “concrete jungle” and “bags of money” fans certainly hinted at a national dislike of the place.

“It is a hell of a theatre to go into,” says Sean Lamont, the 105-cap Scotland wing, of the modern, 82,000-capacity Twickenham. “There must be some sort of sway for England. You get a big home crowd singing God Save the Queen or whatever, it makes a difference and puts pressure on referees’ decisions – they tend to sway in favour with the home crowd.”

However, John Rutherford, a key member of the 1983 triumph, says the trip south held few fears in the late 1970s and early 1980s. “I liked Twickenham,” the former outhalf says. “I thought it was a brilliant atmosphere and the loudest of the stadiums. None of us ever felt inferior going down there or that we couldn’t win. Maybe it was naivety. We would always think it was a 50-50 match.

“England were always more powerful up front than us, so we had to try to outwit them, playing a fast, open game. There are similarities with how the current team will have to play. They are not frightened to try things. It will be tough for Scotland but it is exciting to think they have a chance.”

Certainly there are reasons for optimism. Last year Scotland ended a decade of defeats against France. A fortnight ago, a 10-year losing run against Wales was banished to history in some style.

However, laying their Twickenham ghosts to rest may be the ultimate legacy for outgoing head coach Vern Cotter to bequeath to Scottish rugby, if this young team is to fulfil its obvious potential.

The contests initially remained competitive in the 1990s, despite several great England sides. But the dawn of professionalism and the hosts’ greater playing resources produced some one-sided affairs, with England racking up 40 points in all but one match from 1997 to 2007.

“Trying to build confidence in the camp was very difficult when you looked at the calibre of player up against you,” says Bulloch, four times a loser at Twickenham. “In those days you had to hope that everything went for you and everything went wrong for them.

“We didn’t struggle to win ball, we just didn’t have a cutting edge. You probably need to score 25 points to have a chance of winning at Twickenham but that wasn’t in our repertoire. This side can score tries and don’t seem to have an inferiority complex playing anybody.”

Lamont scored one of their three tries a dozen years ago but England ran in seven. “They just tore us apart and Jamie Noon waltzed through for a hat-trick,” he says. “That was one of the darker days.”

Yet 1999, Scotland’s last championship-winning year, was nearly the glorious exception. Both sides scored three tries and Kenny Logan kicked all three conversions for the Scots. But crucially, he missed three penalty attempts in a 24-21 defeat.

“That was as close as we have been for a long time,” says the former wing, who lost on six occasions with Scotland from 1993 to 2003. “Every time we play England at Twickenham now, I always think about those kicks. I had a knee injury which was heavily strapped. When I kicked there was a real thud – I couldn’t get it right. I did the opposite to what I normally did.”

So could this be the year to put the hoodoo to bed? “This team has as good a chance as any,” says Logan. “They are mentally prepared and they want to prove people wrong. They have been the in-form team of this Six Nations.”

But will that form and fortitude hold up in the Twickenham maelstrom? “You need unshakable self-belief going there,” says Lamont. “A lot of times players say they believe they can win but you question whether they genuinely do. But there is genuine belief in our ability now in Scotland, and it makes a big difference. This team is a different animal.” Guardian service

1 Sonia O’Sullivan: Taming The Tan gave us one last roll of the dice before shutdown
2 Reality Bites – Tales from the new normal: Shane O’Donnell
3 Ireland’s underage rugby stars miss out on chances to shine at Easter
4 ‘NRL Island’ being considered in Australia to continue season
5 Avoid the treadmill at all costs – marathon training in the 2km radius
Real news has value SUBSCRIBE