If the pack can set the correct platform, the visitors have the backline to prosper 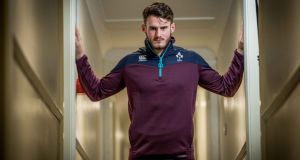 Jack Kelly: returns at centre for Ireland having missed the last two games due to a shoulder injury. Photograph: Morgan Treacy/Inpho

Despite an unbeaten status to which their hosts cannot lay claim, Ireland will enter this match as slight underdogs, when drawing on a formline from the first three rounds of the Under-20 Six Nations Championship.

Wales lost to a standout England team but were otherwise impressive while for Nigel Carolan’s Ireland it has been a slightly slower burn with one-point victories away to Scotland and Italy and then a deserved victory over France in an entertaining affair at Donnybrook.

One young player who has never been cowed by a challenge is 19-year-old Lansdowne hooker, Tadhg McElroy, who loved the sport from the moment he was taken to Dundalk rugby club aged seven. The pathway since then has included the Leinster sub academy before being taken under the care of Lansdowne coach Mike Ruddock.

McElroy with two tries to his name in three outings so far in the tournament, made his Ulster Bank League Division 1A debut having only recently celebrated his 18th birthday, a remarkable achievement given the position he plays. It just happened to be away to Young Munster.

Ruddock, Carolan’s predecessor as Ireland U-20 coach, elicited a striking trust from his young protégé. McElroy explained: “I wouldn’t have been called in if I wasn’t good enough to be there. I was always told that so I banked on that. Mike Ruddock is absolutely fantastic.

He’s a tough cookie and Ireland will need that against a typically physically powerful and direct Wales team. Jack Kelly (shoulder) returns from injury having missed the last two games, albeit at centre with Jordan Larmour switching from wing to fullback.

Tommy O’Brien, who excelled against France while chipping in with a try, moves to the right wing. Up front Fineen Wycherley returns to the secondrow after making his Munster senior debut, while Gavin Coombes comes in at blindside flanker. Prop Greg McGrath and scrumhalf Jack Stafford are in line for debuts off the bench.

The backline gets top billing when describing the strength of this group of young Irish players but if they are to continue their winning ways then it is the pack, a unit in which Caelan Doris, has been a standout player, that must provide a platform.

Ireland have improved through each game, fixing the performance issues along the way. If they continue in the same vein, then anything is possible.