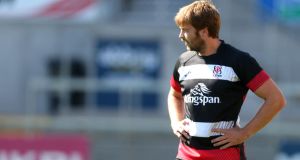 Iain Henderson is likely to miss the remainder of the season for Ulster after undergoing hip surgery.

The province expect the Irish lock to be sidelined for a period of eight to 10 weeks, “with an estimated return date of mid-late October”.

Ireland’s two postponed games in the 2020 Six Nations at home to Italy and away to France are set to go ahead on October 24th - which is just over 10 weeks away - and 31st respectively.

However Ulster return to Pro14 action against Connacht at the Aviva Stadium on August 23rd. The Pro14 semi-finals and final will be completed by the end of September, with the team’s Champions Cup quarter-final in Toulouse on September 20th. The European final will be played on the weekend of October 16-18th, meaning Henderson would have a chance of featuring if Ulster were to progress that far.

Meanwhile Angus Curtis continues to rehabilitate a multi-ligament knee injury, Andrew Warwick is due to undergo hip surgery next week and Will Addison is rehabilitating a back injury.

Greg Jones (ankle), Matthew Rea (ankle), Sam Carter (shoulder) and Matt Faddes (shoulder) are now integrating back into training, following respective surgeries, and are expected to be fit for selection against Connacht.