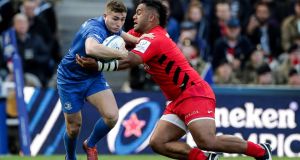 Jordan Larmour hasn’t shied away from reliving the frustration of the Champions Cup final defeat to Saracens, having personally watched the game back two or three times in the interim. He wouldn’t describe it as cathartic but the process of absorbing the lessons began with a collective squad review on Monday afternoon.

The analysis will forensically examine Leinster’s performance, shining a light on the shortcomings and then the focus will be redirected to Saturday’s Pro14 semi-final against Munster at the RDS. Larmour admitted: “It always helps when you go [back] into the game and you can see the solutions; it helps you feel better. The easiest thing I find is to get into training straight away, get back playing and just move on from it.”

First, though, he is asked to look back on Saturday and offer a player’s insight and perspective. Saracens cloying defence denied Leinster time and space and their ability to slow down ruck ball was a significant factor in being able to employ an aggressive line speed. “I thought we could have taken the edges a bit more, tried to get the ball out wide but, they were coming hard off the line and just firing into the ruck, making it hard.

“I felt in the second half we were getting good forward momentum into their 22 and the ball gets ripped and we are all back at our end. It was little things like that, just the small margins in the big games. At times, we got zig-zaggy [in attack]. We didn’t really know where we were going.

“We are at our best when we’re playing with momentum, playing on top of teams, getting over the gain-line. They weren’t allowing us to do that. We did it in little snippets throughout the game. But we didn’t really get into our flow, I suppose.

“When you’re chasing a game as well, you’re trying to force things a little bit. They just keep coming at you, 15 men on their feet, firing into the breakdown, slowing the ball down. Credit to Saracens, there’s a reason they were unbeaten up to then and they showed it on the day.”

On a personal level there was one moment when Larmour escaped the clutches of the Saracens defence, chipped down the sideline, only to nudge the ball forward with his hand as he tried to re-gather it. “I was in between kicking it and catching it. I went to pick it up, it was sort of at my knee height; it just tipped my hand and went forward.

“It’s small margins. That ball bounces up into my hand and then I’m under the sticks. Those little moments win or lose you games. That was my thought process.”

There is no time to wallow. Munster have been preparing for this match over the past two weeks, have a number of players coming back into the selection equation and will be as determined as their hosts in the quest for silverware.

“We want to defend our Pro14 title. Definitely for ourselves we want to finish on a high but we also want to give something back to the supporters. They travel to every game and they are always the loudest fans in there. It’s a great match this weekend, two teams who [will] go at it hard and we’re looking forward to it.”