The Offload: Who is running Munster rugby right now?

Munster coaches depart for pastures new. Plus: anatomy of a Champions Cup defeat 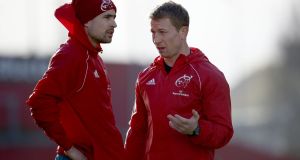 Munster’s loss is set to be Ulster’s gain as Bill Johnston moves to Belfast. This could become a reversal of fortunes following the impact Chris Farrell has made since finding Limerick, via France, after an injury-ravaged start to the big Ireland centre’s career.

Something had to give on the outhalf front now Joey Carbery is the “franchise player”, with Tyler Bleyendaal and JJ Hanrahan scraping for back-up status. Johnston must prove his durability – the 22-year-old boasts a long list of injuries before and after he was sorely missed by James Ryan’s under-20s in the 2016 World Cup final – but, providing he remains healthy, there should be a Munster-reared 10 starting Champions Cup rugby next season.

Felix Jones and Jerry Flannery are also leaving the province after 10 and 14 years of service, respectively. Intertwined decisions that prompt many unanswered questions.

Munster wanted both men to stay, yet they walked despite being offered “competitive terms”. What was the timeline of their departure? Before or after Rob Howley was interviewed to replace Jones as attack coach?

The other provinces are proof that a quick fix is possible

Who is running Munster rugby?

The other provinces are proof that a quick fix is possible. Hiring experience – Andy Friend, Stuart Lancaster and Dan McFarland – put them back on track.

The road to becoming the Best Club in the World should be clearer once a marquee foreign player is landed before 2019/20. And three new coaches.

“This has been a dream job for me, to coach Munster Rugby,” said Flannery.

Wonder what woke him up?

“There was obviously a breakdown at some point recently about what their roles were going forward. There must be something in the background that Felix, Jerry or both weren’t happy with. It is very important I think for the Irish provinces to have local coaches who really care about the environment. I know Jerry and Felix care deeply about Munster. In that regard it was a shock to me and a lot of people because you are losing two good men.” – Ronan O’Gara on Flannery and Jones rejecting new Munster offers to continue working under Johann van Graan.

The Moment that Decided the Champions Cup Final Part 1

From kick-off St James’ Park felt like the opening scene in Saving Private Ryan. The WWII beach landing was filmed by Steven Spielberg on Wexford’s Curraghcloe Beach. That county’s greatest ever sportsman (already) muscled over for a try that seemed to have broken Saracens.

Tadhg Furlong’s score on 32 minutes made it a 10-0 game as we crept towards half-time with Maro Itoje in the sin-bin.

That’s not the moment though. No, the moment came when Leinster scrumhalf Luke McGrath opted to box kick, rather than put the ball dead for half-time, with Owen Farrell rocketing the resulting penalty, against Rob Kearney for not rolling away, into the Leinster 22.

These were championship minutes.

“The thinking at the time was to stick the ball on Billy Vunipola, who was standing on the 22, win the ball over his head and get a two-score lead before half-time,” was the Johnny Sexton reasoning. “Your decisions are only as good as they are in hindsight.”

The Moment that Decided the Champions Cup Final Part 2

Plenty has and will be made about Garry Ringrose’s rare wrong option when a five on two was screaming for a quick pass to put Leinster ahead early in the second half (the third quarter is where they tend to win their trophies). That’s not the moment, though. No, thereafter the game felt like it was slipping away from Leinster, but during minutes 61-66 concern turned to reality. Billy Vunipola had done his homework on Johnny Sexton. The intercept, with Sarries leading 13-10, suddenly had the English storming into Leinster territory. The sin-binned Scott Fardy was only seconds from returning when Saracens’ scrum forced Robbie Henshaw to play wing forward rather than defence beside Sexton. Maybe it mattered, maybe nothing would have stopped Billy Vunipola. Freeze the frame and, four metres from the Leinster try line, Ruddock goes low, Sexton high with McGrath and Lowe also skittled by the giant bowling ball. Four defenders could not stop one man. “We don’t have access to many of those type of players,” Leo Cullen conceded. “They wore us down for sure.”