Amid fallout from post supporting Israel Folau, Saracens star is focusing on his game 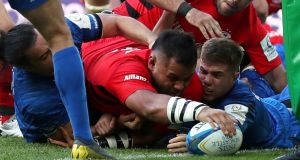 Billy Vunipola: an appreciation. Criticism of the sport’s dominant and perhaps smartest figure is equally unavoidable.

“It’s obviously been a complicated five or six weeks, I guess, for Billy and for the squad, to be honest, as well,” said McCall in the aftermath of this decade-defining Champions Cup final victory over Leinster. “What we needed from him was to do his talking on the field, not off the field.”

Despite the England number eight’s stunning performance – figuring out Johnny Sexton’s attacking strategy with two interceptions before powering past Rhys Ruddock, Johnny Sexton, James Lowe and Luke McGrath for a try of unbridled ferocity – an asterisk remains beside his name so long as his social media post – “Man was made for woman to pro create that was the goal no?” – exists. Saracens and the RFU firmly reject these words, even warning Vunipola for being in breach of contract.

“I’d be lying if [I said] I wasn’t reading the things that are being said, but I am just grateful to be in this team,” said Vunipola when asked about off-field events. “That’s my job now. To put the team first.”

Does the rugby take your mind off what happened?

“Yeah, you could say that.”

Eventually, it seems, the devout Christian will say more about his beliefs. Just not this side of the World Cup or during the contractual lengths of a lucrative salary and endorsement deals.

The 26-year-old is portrayed by many as a decent, fun-loving young man with athletic gifts from the heavens. Despite all the abuse spewed his way, in what has become a hate-fuelled circle, he stalled in the St James’ Park mix zone to impart what sounded like genuine wisdom.

“If you talk to my brother and all those boys they think the sky is the limit [for Saracens]. The way I look at it is we’ll just enjoy tonight because it took losing to Leinster in the quarters last year to motivate us. I’m hoping it won’t take that to happen again, but we are human beings. You can get slack.

“There is no point me standing here saying I want to be the best in the world every single day because that’s a lie. I’m going to have a good night tonight with my friends and family – going to go see my mum and give her a big hug. See where I go from there.”

His face screamed agony when replaced by Schalk Burger on 73 minutes.

By then the trophy was secure. It could be the same limb that denied Vunipola the chance to usurp Kieran Read as king of the number eights during the 2017 Lions test series in New Zealand.

“I’m just going to keep my feet on the ground.”

That seems like an impossible task but so many elite sportsmen and women down through the ages, from Muhammad Ali to Katie Taylor, seek a higher religious power for inspiration.

“He showed a lot of character,” said fellow goliath Maro Itoje. “He is a tough, strong guy. On Friday he spoke about when it’s his turn to show up for the team. He told us he was going to show up and he did that in abundance. Billy always steps up in the big games.”

Vunipola stepped over an invisible line with a minute on the clock. The French officials, clearly instructed to referee offside, gave Sexton a kick to make the Leinster crowd begin to believe that reaching five gold stars was possible on this day. That idea soared for 37 minutes, up until George Kruis commenced his physical torture of Sexton.

And so we witnessed a replay of England destroying Joe Schmidt’s Ireland last February in Dublin. That victory showcased power and pressure – Itoje and Kruis – mixed with Owen Farrell’s accuracy. This victory brought the very same heat mixed with Vunipola climbing inside Sexton’s tactical mind.

Twice the 20-stoner cast his shadow over the Irish playmaker, daring him to fling pre-ordained passes.

“The intercepts for me are fun because [Sexton] kept doing them,” said Vunipola. “He’s amazing at those plays. If you let them unfold he can pick you apart. That’s what he did in the first half. He uses those little plays to give them momentum and to get in behind you. I just saw it as an opportunity to get in his eye line to see if he was smart enough not to play those balls. Not saying he is not smart. I just kept putting myself in that channel. He kept throwing them. Luckily I did catch it because I think it would have been a penalty. I enjoyed it as much as scoring the try.”

One led to the other. The internal struggle for some revolves around Vunipola’s great try living alongside his Instagram post, and whether one can be celebrated as much as the other is abhorred.

“For that finish he told me to get wide, but they weren’t interested in me, and he still managed to finish it,” said scrumhalf Richard Wigglesworth. “He was imperious, he really was. He knew what he wanted to do and he delivered.”

After bringing the full glare of society upon a club that preaches inclusivity, Vunipola promised fellow Saracens he would deliver a special performance.

“I knew as soon as we went over them the first time there was an opportunity, as they brought Robbie Henshaw in on the scrum, so I knew they were a man down [after Scott Fardy’s sin-binning]. Just thought I’d have a go. Luckily, I just got there. Thankful that I did.”

And with that he went off to find his mum.