The team’s head of rugby is a modest presence behind the scenes, but a master tactician 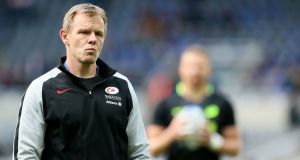 Saracens’ director of rugby Mark McCall: ‘The satisfaction you get is when you see how happy everybody is.’ Photograph: Richard Sellers/PA Wire

It cannot go on like this. Mark McCall cannot keep being packaged in the same convenient way his reticent nature promotes.

No director of rugby is a mere pawn on the Saracens’ or any chess board (he may settle for rook or bishop).

“Another coach who has won what he has won and done what he has done would probably be revered, wouldn’t he?” Richard Wigglesworth, the England scrumhalf, wondered aloud. “He is smart in all different sorts of circles. Because he doesn’t like doing the press, in this world we live in he doesn’t get talked about, but his record stacks up against probably anyone in the world.”

He is not a big guy for Churchill speeches, he is not telling you this is how this is going to happen

Who leads the famous Monday meetings?

“He usually says the first thing,” Wigglesworth continued. “Again, a delegator. He is more than happy to listen, take information, he has numerous chats with individuals within the week: ‘What do you think of this? How do you get this out?’

“He is not a big guy for Churchill speeches, he is not telling you this is how this is going to happen. He gets round the boys, gets round the senior players, ‘what do you think of this? I need you to do this.’ It all adds up to a very, very diligent man who leaves no stone unturned.”

Ulster and Irish rugby lost McCall many moons ago (November 2007) and may never retrieve the 51-year-old now that his quiet leadership style is in full bloom.

There is a decency to the man. Friday’s short, sharp answer to a question about Saracens rarely having to chase a two-score lead was met with an apologetic smile come Saturday night.

“Genuinely, the satisfaction you get is when you see how happy everybody is,” said McCall, surrounded by a sprinkle of English and Irish print reporters late on Saturday in Newcastle. “I could say it is just about the players, but it is about the staff as well. We have got the same S&C staff who have been here for nine years together. They give a shit about the club and they care about the players. They will go to an A League game in Bristol on Monday night, not because they have to go but because they want to see the players they look after.

“That’s what gives me the most pleasure, is just seeing what it means not just to our playing group but our overall staff as well, who are phenomenal at what they do.”

Unsolved mystery: three minutes into Maro Itoje’s sin-binning, Tadhg Furlong powered Leinster into a 10-0 lead; but when this crucial player returned the score was 10-10.

“For some reason [the yellow card] freed us up. Perhaps we’re quite good with our backs against the wall.”

McCall smiles, in rare form, leaning back against the wall.

“I think this group of players can see things for what they are and not get spooked by the scoreboard or something unavoidable that we couldn’t prevent. They’re brilliant at assessing what is really happening. They don’t see ghosts. They’re actually really good at understanding what the situation is. When you’ve got that clarity you’re able to find solutions to anything.”

During an early break in play Wigglesworth entered the field. He seemed to be relaying information from the coaches but, as McCall confirmed, the sub scrumhalf felt empowered to make a tactical intervention in a European final.

Sure enough, Billy Vunipola switched from beacon to decoy.

You’d love to be in the dressing-room at half-time to hear what the players are talking about, not the coaches

McCall: “Richard is a wise old fox. We don’t go: ‘What’s he doing?’ We trust him to say something which is really sensible and Owen [Farrell] can determine what to do with that information.”

Farrell and Vunipola listened, computed and evolved to turn 0-10 into a 20-10 victory that leaves no rational person in any doubt over who rules European rugby. And who is their primary leader. Even if McCall contests the idea.

“You’d love to be in the dressing-room at half-time to hear what the players are talking about, not the coaches. Thankfully, we generally agree with what they are saying but they are leading it, feeling it. We don’t wait for half-time to deliver those messages because they are being delivered on the field.”

So you’ve made yourself redundant?

“It kind of feels that way at times.”

There is no lie in his voice but what he says is untrue.