AIL round-up: Lansdowne’s title defence off to a slow start 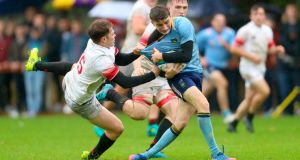 The new All-Ireland League Division 1A season may be only two weeks old, but already Lansdowne’s title defence is coming under serious pressure with Mike Ruddock’s men suffering back-to-back defeats.

Cork Constitution, Clontarf and Garryowen are two-from-two at the top of the table, with the latter inflicting a 17-14 loss on Lansdowne at a wet and greasy Dooradoyle. Tireless number eight Sean Rennison ran in a late match-winning try as Garryowen gained some revenge for last season’s semi-final defeat.

Clontarf are shaping up as one of the teams to beat after they continued their winning start with a 24-15 success at Terenure College. They had tries from skipper Michael Noone, Ivan Soroka and Angus Lloyd, who ran an intelligent support line to score his first try for his new club.

Meanwhile, former Munster back Johne Murphy touched down twice as Division 1B pacesetters Naas enjoyed a 28-3 bonus point victory at home to Ballymena. Murphy’s men are closely followed by Malone who had two tries from winger David Irvine in their 18-10 defeat of St. Mary’s.

Ulster’s Chris Henry, who is part of the Malone coaching team and coming back from a calf injury, donned the number seven jersey as he made his first appearance for the club in over a decade. Malone’s Ulster rivals Banbridge impressed with a 24-0 dismissal of Buccaneers, which included a try from Henry’s provincial team-mate Schalk van der Merwe.