Remembering Munster’s ‘Miracle Match’: When ‘all players stood up’ 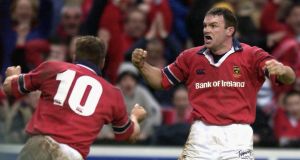 John Kelly celebrates his try for Munster during the “Miracle Match”, where the province needed to win by exactly four tries and 27 points against Gloucester, which they succeeded in doing so. Photograph: Jamie McDonald/Getty Images

Looking back now, it perhaps doesn’t seem quite so fanciful. Facing into the final round of pool games, Munster had to beat Gloucester and also by four clear tries and a minimum of 27 points, or by five clear tries, to progress. Otherwise they were out. So they won by exactly four tries and 27 points, scoring their fourth try in the 80th minute and securing a 33-6 winning margin thanks to Ronan O’Gara’s conversion with the second last play of the game.

Yet the events of January 18th, 2003, at Thomond Park were considered so unlikely that not alone did it become simply known as The Miracle Match, but the protagonists themselves weren’t aware of the permutations.

Gloucester had won the round-one meeting in Kingsholm by 35-16, and were runaway leaders of the Premiership. The week before, Munster were beaten 23-8 by Perpignan.

Declan Kidney had been co-opted on to the Irish coaching ticket to be replaced by Alan Gaffney, who was feeling the heat that week.

“There was a lot of doom and gloom around that week, for certain,” he admitted yesterday, from his home in Terrigal, an hour outside Sydney, where he is now the ARU’s rather grandly titled national elite programme coach.

Players would later speak of feeling close to depression on the Sunday after the Perpignan beating. By Tuesday the ball was being dropped repeatedly in training, until a group huddle, when Anthony Foley told them that Gloucester players on television the previous Sunday had declared they were “looking forward” to coming to Thomond Park and seeking to end Munster’s unbeaten Heineken Cup record there. That focused the minds.

Even so, Gaffney admits “the 27 points and the four tries never entered into the conversation. It wasn’t something we addressed”.

“To be truthful, for us to beat Gloucester by that much, in racing parlance, mate we would have been very long shots. But everyone stood up that day.”

On vintage Munster days in Thomond Park, they invariably locate an Achilles’ heel or star man in the opposition ranks. In the sixth minute O’Gara launched a towering garryowen which the rugby league convert Henry Paul, playing out of position, so struggled to read that he ended up swinging his foot at the ball before gathering on the bounce. Cue O’Gara’s penalty and a tortuous 80 minutes for Paul.

The tries came virtually on the quarter. In the 19th minute, Peter Stringer sniped to the blindside and his perfectly timed pass put John Kelly over.

In the 40th minute, left winger Mossie Lawlor pounced on a lovely grubber from Jason Holland through the tightest of gaps. 16-6 at half-time.

Gloucester were actually quite resilient. Munster had to earn every point. After hammering at the Gloucester line, O’Gara and captain Jim Williams settled for a critical 54th penalty to make it 19-6, despite both being blissfully unaware of the permutations.

Three minutes later, Holland’s cross kick to the right wing was gathered on the bounce by Mick O’Driscoll. O’Gara added the touchline conversion, despite Thinus Delport charging and shouting, which did not please referee Joel Jutge.

Only now was the miracle coming in to view. Although the four-try/27-point winning margin had been identified earlier in the week in at least one national daily (ie this one) even the RTÉ commentary team of Jim Sherwin and Ralph Keyes hadn’t countenanced it. That was, until the 62nd minute, when Keyes declared: “I think four tries and 27 points might do it.”

Ten minutes from time, Sherwin re-asserts that 27 points and four tries “would be enough – there’s no doubt about that.” Keyes explains the points differential and concurs. “Four tries and 27 points is the requirement.”

Yet clearly nobody told Ludovic Mercier, Gloucester’s French outhalf, or his team-mates. At the very moment Keyes is saying this, Mercier hears a call from his outside, and taps a penalty, 20 metres out and in front of the Munster posts, and O’Driscoll won a turnover penalty. Only when his wife asked him afterwards did Mercier realise his mistake.

Ultimately, O’Gara found touch with a penalty from halfway inside the Gloucester 22 entering the 80th minute, before the unstipulated “injury time”. Kelly would later admit that it was just as well there was no clock in the ground. “Otherwise we might have panicked.”

“The last try had nothing to do with me mate,” admits Gaffney. “That was a play that Munster had had for some time, way before I arrived, and I don’t think they’d ever played it until that day. But they called it, and it worked. A lot of things worked that day mate.”

It was a mildly astonishing play, which drew gasps. Frankie Sheahan threw to the tail, Donncha O’Callaghan caught and passed the ball down to Foley. (Last Tuesday marked the second anniversary of his passing, and his familiar carrying, and much else made him Ralph Keyes’ deserving man of the match).

But instead of the anticipated maul, Foley transferred to Stringer, who passed infield to O’Gara and on to Holland. He turned, handed the ball to Mikey Mullins, also outstanding that day, and Alan Quinlan was on hand to help set up a maul halfway across the pitch and in front of the Gloucester posts. The drive was held up, so too Jeremy Staunton’s charge, before O’Callaghan’s clear-out enabled Stringer and O’Gara to move the ball on for Kelly to dive over.

Kelly, O’Gara and O’Callaghan celebrated like the job was done, but O’Gara’s conversion was still required. “None of us had a clue 27 points was what we needed,” O’Gara would admit subsequently. O’Gara nailed it, and O’Callaghan having gathered the restart, then found touch without knowing whether time was up. Whereupon, Jutge signalled full-time.

Cue pitch invasion and the sight of O’Callaghan and Williams jumping up and down wildly with the supporters.

“When we came back into the dressingroom, someone said we had to go back out to the fans,” recalls Gaffney, and both players and supporters joined together in a rendition of The Fields.

The game had kicked off at 2.45pm, almost in darkness. The old Thomond Park had been crammed to its 12,300 capacity and some. The pitch invasion and sing-song was old school.

Maintaining that it was impossible to single out individuals, so good had every player been at their jobs that day, Kelly would rate it “the best team performance I’ve ever been involved in”.

Fact or fiction? Gloucester’s gameplan found in a Limerick taxi

“I know a lot of people still go back to their game plan being left in a cab and it being given to us, but for all that was worth, that had absolutely zero impact on what we did,” says Alan Gaffney, in reference to the famed case of Gloucester’s game plan supposedly showing up in a Limerick taxi and being passed on to the Munster management on the morning of the game.

“What are you going to do, change everything you’d done all week on the Saturday morning of a game?” says Gaffney. “So you weren’t going to change anything because of that. Secondly, you didn’t know if it wasn’t total bull**** to start with, which it quite clearly could have been. And to be truthful mate, the players were never shown it.”

At their meeting on the morning of the game, Gaffney recalls telling the squad he was in possession of Gloucester’s supposed game plan “but that was it. Whatever impact they say that had, to me it had virtually no impact.”

“We just adopted an attitude that we just had to go out and play well, and I remembered Axel kept using the word ‘process’. It wasn’t the result, we just had to look after the process. But the 27 points and the four tries never entered the conversation.”