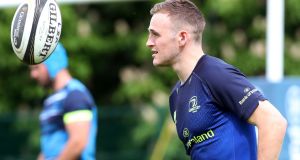 Nick McCarthy has had plenty of exposure to Leinster’s first team – three starts and 18 runs off the bench in 2017/18. Photograph: Bryan Keane/Inpho

Nick McCarthy is expected to join Munster next season. The 23-year-old scrumhalf would follow the career path of Joey Carbery and Andrew Conway by leaving Leinster to further his playing prospects.

Neil Cronin was brought up from Garryowen in the All-Ireland League on a one year deal and last week he was added to their European panel as cover for injured All Black Alby Mathewson.

Munster landed Mathewson on a three-month deal that is due to expire in December. Murray, who has re-signed until 2022, is due back from a neck injury soon.

The McCarthy move appears to have been prompted by the IRFU – keeping with the recent policy of spreading underused Leinster talent to other provinces – as Leo Cullen could have five Irish qualified scrumhalves on the books next season when Jamison Gibson Park completes the three year residency requirements.

Last Friday former Blackrock College schoolboy Paddy Patterson was selected ahead of Ireland under 20 scrumhalf Hugh O’Sullivan in the ‘A’ side that beat Munster A in the Celtic Cup semi-final.

Gibson-Park is clearly second choice at Leinster behind Luke McGrath, with the Kiwi bringing the best out of the 25-year-old since Eoin Reddan’s retirement in 2016. But McCarthy gets plenty of exposure to the first team – three starts and 18 runs off the bench in 2017/18 – mainly because Cullen couldn’t pass up on the chance to sign Scott Fardy and James Lowe. Champions Cup and Pro14 rules stipulate that only two Australian/New Zealand players can be included in the matchday 23 squads.

Cullen understandably leans towards picking Fardy and Lowe over Gibson-Park, with McCarthy in reserve, but Lowe missed the European semi-final and final last season as an injury to McGrath demanded Gibson-Park’s inclusion.

This messy scenario disappears next season when Gibson-Park becomes reclassified as an Irish player. Lowe qualifies under residency in 2020.

McCarthy’s move to Limerick will be interesting if only to see who Munster coach Johann van Graan prefers when Murray’s unavailable. Williams certainly proven his worth in Exeter, playing with calmness and denying a match winning try when tracking back to tackle Phil Dollman, whereas Hart has failed to establish himself since arriving from Racing 92 in 2017.

The Clontarf RC and Belvedere College scrumhalf was passed over by Leinster but built a decent reputation under Bernard Jackman at Grenoble only for injury to stall his progress at Munster. Hart clocked only 28 minutes across two games in September with just seven starts last season.

“The Ireland Men’s 7s squad contracts for the 2018/19 season will be confirmed following the completion of the Celtic Cup,” stated the IRFU. “The men’s squad are also targeting Olympic qualification this season as well as seeking to secure a place on the World Series.”

Meanwhile, the IRFU’s strategic plan (2018-2023), which will include the direction of the women’s game following a painstaking review process, will be published next Tuesday.