Danny Cipriani left out of England squad for autumn Tests 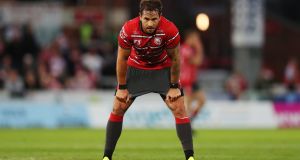 Danny Cipriani has been left out of England’s 36-man squad for next month’s autumn international series, the Rugby Football Union has announced. Photo: David Davies/PA Wire

Danny Cipriani has been omitted from England’s squad for next month’s autumn internationals but Eddie Jones has handed a recall to Ben Morgan amid his back-row crisis and taken the surprise step of naming Dylan Hartley and Owen Farrell as his co-captains.

The head coach has opted against calling on Cipriani, who started England’s most recent Test in June, while the outhalf’s Gloucester teammate Morgan is selected by Jones for the first time, having won his last cap during the 2015 World Cup. Chris Ashton is also included in the 36-man squad, despite not having played this season because of suspension, and Jones has turned to the Exeter pair of Alec Hepburn and Ben Moon to solve his loosehead problems after Mako Vunipola was the latest front-line player ruled out by injury on Wednesday.

“I’m really happy with the squad,” Jones said. “We can only control what we can control and injuries have happened. It gives an opportunity for some good new players to play some important Tests for England, while players who have been in the squad before will have to take on more responsibility.”

Cipriani’s snub is perhaps not surprising considering he was left out of the most recent training squad last month on the basis of his form but it must be seen as damaging to his hopes of going to next year’s World Cup. Manu Tuilagi is, however, selected and will be in the frame for a first start under Jones when England begin their autumn series against South Africa on 3 November.

After Nathan Hughes was handed a six-week ban late on Wednesday night, Jones’s options at No 8 were further diminished with Billy Vunipola and Sam Simmonds out injured. Accordingly he has rewarded Morgan for his impressive form for Gloucester this season while Zach Mercer is another option.

Michael Rhodes leads the uncapped contingent and is joined by his fellow South African Nick Schonert with Dan Cole still left out. James Haskell is also missing, as is Don Armand, with Worcester’s 19-year-old back-row Ted Hill a surprise inclusion. Joe Cokanasiga is also among the wing ranks.

In the second row Charlie Ewels and Elliott Stooke appear to profit from injuries to Joe Launchbury, Nick Isiekwe and Jonny Hill. A third Bath lock Dave Attwood can count himself unlucky to be overlooked. While Jones’s forward options have been decimated his back division seems more settled with Richard Wigglesworth replacing Dan Robson as the only change from last month’s training squad.

Jones has named co-captains before – Chris Robshaw and George Ford shared duties against Samoa last autumn as well as against the Barbarians earlier that year – but this is the first time he has selected Hartley and Farrell together. Farrell captained the side on the summer tour of South Africa but Hartley has always been Jones’s go-to man when available.

The head coach said: “They have both been excellent captains for England in the past and will provide a powerful leadership base for us on and off the field.” – Guardian service