Timing key to Donnacha Ryan not getting Ireland contract 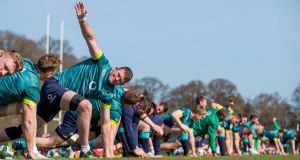 The decision by the IRFU not to award Donnacha Ryan another international contract looks, at face value, to be an odd one. Ryan started both games against the All Blacks and all but the opening defeat to Scotland in the Six Nations, which he effectively ended as first-choice lock, given it was Devin Toner who was “rotated” to the bench to be replaced by Iain Henderson against England.

Ryan has probably had the best season of his career but, coming to the end of his current three-year central contract with the IRFU, his age, 33, was clearly a factor and so, after 13 seasons with the province, featuring 160 games and counting, Ryan’s departure to Racing 92 is seemingly now a fait accompli.

What compounds Munster’s predicament is that in these post-Paul O’Connell and Donncha O’Callaghan years, their secondrow cupboard hasn’t looked so bare since the 1990s. Dave Foley is bound for the Top 14 with Pau, Mark Chisholm has been sidelined with concussion issues and is out of contract at the end of the season, while Jean Kleyn, a special project who is in the first year of a three-year contract, has a serious neck injury.

The flip side of this is that another non-Irish qualified lock will now effectively have to replace Ryan within the system.

This is where Rassie Erasmus’s knowledge of South African rugby will again prove particularly useful, for if there is one country that possesses a stock of big, tall secondrows, it is his native land – witness the signing of Springbok forward Jean Deysel on a three-month contract due to Kleyn, Foley (who has undergone surgery on a wrist problem) and Chisholm all being sidelined. This also explains why, by all accounts, Munster did all they could to make their offer of a provincial contract to Ryan as remunerative as their budget allowed, but the package being offered by Racing was substantially more.

The decision not to offer Ryan a new international contract looks as if it was taken at the end of last season, or at any rate by the end of the November window. It perhaps was based in part on the premise Henderson, Ultan Dillane and Quinn Roux would have made more strides than has been the case heretofore.

Ryan has been playing so well that, age aside, were the decision made now it’s hard to imagine him not being offered a central contract. Although Erasmus deftly tiptoed along a diplomatic line yesterday, Munster will be feeling aggrieved they will only have three players on international contracts next season – Peter O’Mahony, Conor Murray and Keith Earls. And this despite having four starters and seven of the 23-man squad that featured in the win over England.

The word on the grapevine is the IRFU have had to help Munster out financially. Even so, that Leinster have eight internationally contracted players must equate to a significant financial leg-up from the union – in the region of €3 million.

If the decision not to award Ryan another international contract suggests a lack of fluidity in the union’s contracts’ system, or even a little coldly cut and dried, it’s worth noting there must be some long-term thinking behind their strategy, and specifically the 2019 World Cup.

By then, Ryan will be 35 whereas Toner will be 33, and Henderson, Dillane and Roux are younger again. Furthermore, if a team’s prospective secondrow pairing (or at any rate the three match-day locks) for the 2019 World Cup are not in place a year out, or even 18 months out, you’re missing a trick. Although Ryan’s performances this season suggests he has another two years at least at the highest level in him, if David Nucifora and Joe Schmidt reckon Ryan will not, in all likelihood, be in that mix, fair enough. That’s their decision.

As the aforementioned list of players under international contracts demonstrates, so much of this is about timing and it will never be perfect. It could also be the case Ryan would have moved on in any case. He had a good look at his options before signing a three-year international contract during his last round of negotiations. He is clearly of a mind to sample something outside of Munster. One can’t blame the player for taking up the chance to join Racing and sampling life in Paris.

Yet the sad aspect to all of this is that, suddenly, Ryan has now almost certainly played his 47th and last match for Ireland barring an extreme injury crisis in the secondrow. Then again, bookending his final season for Ireland with a historic win over the All Blacks in Chicago and a win over England at the Aviva Stadium wasn’t a bad way to do it.

Johnny Sexton aware of how Ireland can offer fans an escape 15:34
Jason Holder ‘disappointed’ in Australia and Pakistan for not taking the knee 13:17
Arsène Wenger: Arsenal was a matter of life and death to me 10:06
Extremes of sweet and sour for Solskjaer as Man United show signs of revival 10:08
Bilic hits out at €16.95 pay-per-view for West Brom and Burnley 08:31
Crossword Get access to over 6,000 interactive crosswords