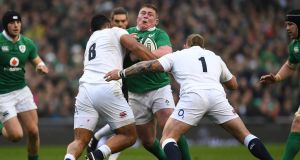 Named on almost everyone’s team of the Six Nations, even the chill winds that sometimes blow in from outside this island have warmed to Tadhg Furlong.

The Irish prop ended his championship being hauled ashore in Aviva, emptied after helping defeat England and generating talk of becoming the starting tighthead on the Lions tour, still two months away.

“Look, it’s nice people are writing nice things about you, but at the end of the day no squad is picked,” he says cautiously. “There’s not much you can control in that.

“I dunno. Is it a journalist’s fixation? The players don’t talk about it a whole lot,” he adds. “Maybe in the press a bit. I dunno.”

Furlong, full of home-spun wisdom and an attitude that lies somewhere between cool detachment about Warren Gatland’s New Zealand thinking and a distaste for presumption, is relaxed about a rugby view lacking in complication. He keeps doing what he’s doing and that minds itself.

Lions baptisms so early can sometimes jump start a spiral downwards, but Furlong is almost fearfully disinterested, as if a hex is being forced on him. He  takes such assertions like a barfly’s tip for Cheltenham.

“Before I went off [against England] there was two or three scrums, a reset and then a scrum again. That tends took take it out of you a small bit. It was a long trot from the far side of the field . . .

“Joe [Schmidt] actually hasn’t given me any feedback yet. No, I actually don’t think I caught him before I left on Sunday, before we left the hotel. Usually if you go back into camp there might be a review of games, stuff like that. But that bridge isn’t crossed yet.”

Leinster coach Leo Cullen, he says, didn’t say much to him either. Does anybody talk around here? Beating England, though, must have given him the energy of a four-year-old on a can of coke coming back to Leinster and European club rugby.

“I never even thought about it that way to be honest with you,” he says, adding that there is “a bounce” in the Leinster training sessions.

At a personal level Furlong did ask himself questions about how he would measure up against players like England’s Mako Vunipola or Joe Marler, would his body hold up, could he perform. Over five matches he answered.

“I suppose when you get a bit of game time and minutes on minutes in the jersey, you sort of feel that ‘I’m not far away here’,” he says.

That’s Furlong bigging himself up. As much as he will ever do.