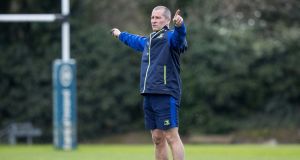 Stuart Lancaster is trying hard not to give an impression he is downloading all of the private misgivings, the nervous histories or the mental weakness of the Wasps international players. He coached several of them with England and watched many more as the national coach.

But Lancaster, who was figuratively immolated by the media during the last World Cup and who may now see England’s luxurious training base in the broker belt of Bagshot as Jim Bowie saw the Alamo, is used to provocative questions. Perhaps there is a coaching omerta at play.

“Obviously I can add some more insider knowledge on the players,” he says. “But I coached them at international rugby. I haven’t coached them at Wasps. I’ll pass on that information because I want Leinster to win, but Jimmy Gopperth, I’m sure, will be doing the same with his Leinster playbook in his back pocket.”

Maybe Marty Moore too about scrum personality or lineout characteristics. But then as Lancaster explains, analysis ensures there are few secrets and, he adds, virtually no mental scar tissue from last year’s head-melting double header with Wasps.

He is being asked to share the foibles and small let-downs of the England players, James Haskell, Christian Wade, Joe Launchbury, their private twitches or go-to plays under pressure and whether Danny Cipriani is as flaky and flashy as those who do not like him say he is.

“When he has to run set-piece starters, his ability to take the ball at the line with two runners coming at the line, his decision on who to hit, is also very good.

“No, he’s a good player. He was unfortunate in my time with England; he was up against George Ford and Owen Farrell, who were just ahead of him in the pecking order because they had opportunities before him.”

Lancaster punctuates his views with pointing out that everything Wasps can do Leinster can too, and along the road puts to the sword some of the neat assumptions that have grown around this week.

The players coming back from Ireland with the England win still booming is irrelevant. The way England play is not how Wasps do business. The players with England and their coaching and strengths are different to the Ricoh Arena side.

Positive thoughts from the Six Nations win over England, maybe, but really no. Eddie Jones is not Dai Young and Wasps have Australian Kurtley Beale and Springbok Willie Le Roux and what they might do is . . . well last time out against Worcester, which Wasps won 40-33 to secure a Premiership play-off, the Guardian called it “an 11-try frolic”.

Wasps have scored 70 tries this season, an average of four a game. Not much different from Leinster as it happens, who have slated 79 tries in 19 Pro12 games.

“I think they have changed,” says Lancaster. “They have different players. Piutau is gone, George Smith is gone. Danny Cipriani and Kurtley Beale have come in.

“It is turnover ball where they are most dangerous but, equally, I have seen them score tries straight from set piece as well, so they can challenge you in lots of different ways. They have a good maul and a good scrum and they are strong defensively. They have got good players who clearly believe in the coaching team. Dai Young has done a brilliant job in building the team.”

Whither Leinster among the aristocrats? There is never any harm in talking up Wasps and deflecting attention. The meeting of two teams who top their respective leagues can even be construed as a Pro12 v Premiership duel.

In that the Irish rugby universe will not hesitate to concentrate its emotional overspill on to the shoulders of outhalf Johnny Sexton. Yes? Yes? Yes?

“If you look at all the top teams, they have a variety of decision-makers in the backline. You wouldn’t say New Zealand were too reliant on Dan Carter. They had Conrad Smith at 13, Israel Dagg at 15, Aaron Smith at nine.

“We have Luke McGrath, Johnny, Garry (Ringrose), Robbie (Henshaw), Joey (Carbery), Isa (Nacewa). We need to spread the workload, the decision-making. Clearly, Johnny, well any flyhalf, is the guy who controls the ship. But, it’s more than that . . .”

The emotion and intent of Seán O’Brien, the choices made in the lineout, and the lingering experience of previous Leinster wins in the European Cup, in 2009, 2011 and 2012: they count.

“Wasps are a true champion European team,” says Lancaster, keeping with the respectful view of the players he once coached.

And with no hesitation. “Similar to Leinster,” he adds.

1 Tipping Point: DeChambeau’s transformation raises questions, but who will ask them?
2 Patrick Mahomes reported to have signed 10-year $400m deal with Chiefs
3 Monica Seles: The warrior queen who could have been the best ever
4 Ken Early: Resurgent United can be the top team – in Manchester
5 Coronavirus implications will delay completion of CVC’s €450m Six Nations deal
Real news has value SUBSCRIBE