Rassie Erasmus stays focused on the here and now 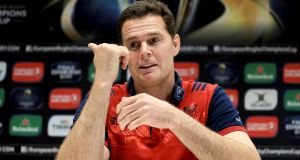 Munster director of rugby Rassie Erasmus on Donnacha Ryan’s departure: “He knows we wanted to keep him and we really tried our best.” Photograph: Donall Farmer/Inpho

Rassie Erasmus has given a qualified assurance that he will still be with Munster next season. The province’s director of rugby did admit that there had been formal and informal contact with figures in South African rugby amid reports in their media that Erasmus is set to return there in June in his previous position as their union’s director of rugby.

According to the Rapport newspaper, negotiations between SA Rugby and Munster to bring him back to South Africa are at an advanced stage. Three sources reportedly told the publication t his return is now “a mere formality”.

However, when asked specifically if he expected to be with Munster next season, Erasmus said: “Yes I do. I do. Just because I have a contract with Munster, I will never go outside my contract and outside the clauses and not honour a contract if there isn’t something stipulated there.”

In advance of their European Champions Cup quarter-final against Toulouse at Thomond Park on Saturday, Erasmus admitted that this “speculation” was ill-timed.

News of Donnacha Ryan’s move to Racing 92 at the end of the season to take up a two-year deal with the Parisian club is also far from ideal. With Ryan not being offered a renewed international contract by the IRFU, Munster’s offer of a two-year provincial contract could not match the package being offered by Racing.

“I guess if we had more money then we could have kept him,” admitted Erasmus. “I don’t think it’s a matter of Donnacha chasing money. I think it’s a tough situation for a guy like him. He is 33 years old. He has probably got one big contract left in him. Rugby players just have a shortish lifespan, earning enough money.”

“He knows we wanted to keep him and we really tried our best. I guess it is one of those things where you must be happy for him if that’s what he wants to do. He has served this club well. He has done great things for this club. Like all the other greats, Ronan [O’Gara] all the other guys who eventually move on, you have to respect that and wish them the best.”

“There’s only so much money and there’s only so many players you can contract. In that way, we understand it and from a personal opinion, you might disagree, but that’s besides the point. I’m not the guy who when Ireland lose who has to face the music. So from that side, I totally understand, but that’s not to say I think he [Ryan] shouldn’t get one.”

Ryan’s impending departure will leave Munster thin in the secondrow. “We’ll have to bolster the squad for next year, that’s definitely one of the positions we’re a bit thinner [in],” admitted Erasmus.

In addition to all these distractions, Conor Murray remains a major doubt for the quarter-final due to the shoulder/neck injury he suffered in the Ireland’s penultimate game against Wales over three weeks ago.

Murray will avoid all contact this week and will be given until Friday or even Saturday to prove his fitness, but Erasmus said the scrumhalf was no better than a 50-50 chance.

Jack O’Donoghue is also a doubt with a hip flexor problem, although after being ruled out of the win away to Zebre, Andrew Conway did return to training yesterday, as did Keith Earls, CJ Stander, Simon Zebo and the aforementioned Ryan.

This will be Munster’s first quarter-final since they beat Toulouse 47-23 at the same stage three seasons ago, and Erasmus disregards their current standing of 10th in the Top 14 following last weekend’s defeat away to Bordeaux, their fifth in their last six league games.

“Lots of things were a first for me this season, but this again is going to be something new and the players are telling me about how big it is. I can’t actually believe that after some of the things that happened this year that is it is going to be bigger, but looking forward, the challenge is that it is going to be a hell of a grind for us. We are definitely a small team, a physically smaller team. No doubt about that. We will have to punch above our weight and when we get those one or two opportunities try and make them count.”