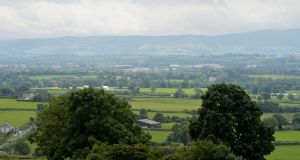 The skills of dairy farmers from Nenagh were not in high demand in the commercial hub of Sydney. Photograph: Alan Betson

Mary Maher’s father called her his “Rosebud” so to all she became known as “Bud” Maher.

Bud was my father’s mother and her family came from Nenagh in Tipperary.

She once told me the story of how her family, grandparents, parents and children, packed up and sailed to Sydney.

There were no virtual tours or Lonely Planet guide books. They had almost no knowledge of their destination in far western New South Wales.

There was no going back and they had no Plan B. There was only one way to go and that way was forward.

These were mentally strong people.

After sailing the length of the Atlantic, off the South African coast, their ship hit a reef and needed repair.

So the immigrants were forced to live in unimaginable conditions in Cape Town for several weeks before re-embarking for Sydney.

After a few days sailing out of Cape Town in the midst of the Indian Ocean, a virus broke out among the passengers that reaped a heavy toll. The Mahers coped better than most, but their baby became ill. After months at sea and crossing three oceans their “Plague boat” was not allowed to dock in Sydney town, but because they were heading further west the family were allowed to disembark at the extreme western end of Sydney Harbour in Parramatta.

On their first day in Australia, the Mahers buried their baby girl, Anne, who had died as they sailed into Sydney Harbour.

After putting the first of many Mahers into Australian soil, they began the arduous 400 kilometre trek west, that would end at a barren piece of land south of the western New South Wales town of Forbes.

Here, in a landscape that had no resemblance to the fields of Tipperary, they begin their dairy farm.

Years later, after drought, death and crop failure, with their dreams smashed, they walked away from this land’s unforgiving harshness. That brutal block had killed a generation and would scare the next two.

Once again, with only what they could carry in their hands, the Mahers left their farm and retraced their steps back to Sydney.

The skills of dairy farmers from Nenagh were not in high demand in the commercial hub of Sydney. Like so many Irish at the time, they were sentenced to lives of manual labouring. Twelve-hour shifts, six days a week for a pittance of shillings.

Good Friday and Christmas Day were their only holidays.

Education past the rudimentary requirements of reading, writing and basic mathematics was unimaginable.

Bud married a kind, honest, hard-working man, who had a secure job. In surviving the horrors of the trenches of the Somme, my grandfather had what we now know as post-traumatic stress disorder. He did not drink and he was never violent, but life for him was hard. The explosions of the guns never left him.

Her two rugby-playing sons would grow up in the desperation of the Great Depression, only to come of age as the second World War ignited.

As the Japanese began to bomb Darwin in Australia’s north, Mary, like so many mothers of her generation, sent her eldest, my Dad, to the fight.

If ever a person had the right to complain about the harsh unfairness of life it was Mary Maher.

Yet in the 93 years she was on this planet she was a beacon of love, positivity, strength, encouragement and humour.

My father and his brother, Clem Williams, both played rugby for the Eastwood Club in Sydney. Dad was scrumhalf and Clem was a quality backrower with an impressive physique, who was known for having a very short fuse.

When exploits of Uncle Clem’s on-field scraps were being retold, this most genteel and calm country woman would say with a straight face: “Poor Clem, he has my temperament.”

I have a vivid memory of Bud in her 80s sitting with my Dad, watching me play for Eastwood. Dressed from a bygone era, in her white gloves and hat, she would sit in the grandstand and silently observe. Then, to my great horror, she would produce a very large white handkerchief and wave it in my direction, laughing through the entire experience.

She was a hoot.

Two weeks ago, I drove through Nenagh’s streets for the first time in years and I thought of her life.

Her resilience and unending optimism. Her ability to endure and overcome whatever life tossed her way, always defiantly holding her family together. In her own gentle way she was one of the strongest people I have ever encountered.

As panic sweeps the country, I wondered what she would say to those weak people who refuse to simply stay inside their homes to save lives? To those who have allowed themselves to be infected by fear and hoard, selfishly stripping supermarkets shelves? To those who continuously whine and complain?

I remember sitting in her kitchen, very late in her life, at a time when her brothers, sisters, husband and two sons were all dead. As she made me tea, she repeated the same advice she had given me time and time again.

“Darling, you just have to be strong. It’s that simple.”

It is that simple and as always, Bud Maher is right.