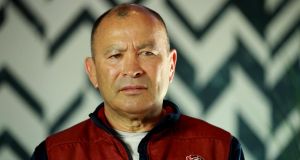 England coach Eddie Jones is set to be asked to take a pay cut by the English RFU. Photograph: David Rogers/Getty

Eddie Jones will be asked to take a pay cut after the Rugby Football Union revealed it is set to lose up to £50 million (€58m) owing to the disruption caused by coronavirus. The RFU chief executive, Bill Sweeney, has already agreed to a wage reduction of more than 25 per cent with Twickenham expecting massive losses over the next 18 months.

Jones earns around £750,000 (€870,000) a year, making him the second highest paid coach in the international game, but the RFU will discuss reductions with him and the rest of England’s coaching staff as cost-cutting measures.

The union was already anticipating making a loss this year – having returned a £15m (€17.4m) profit in its most recent annual report – but with Twickenham closed for the foreseeable future RFU officials including Sweeney, who earns in the region of £600,000 (€700,000) plus bonuses, have already agreed to a pay cut “in excess of 25 per cent”.

The cuts may impact on any negotiations between Sweeney and Jones over a contract extension until the 2023 World Cup. Jones’s contract runs until next summer but after England’s last outing, their Six Nations victory over Wales, he revealed he was due to discuss his future with Sweeney.

The RFU insists it has plans in place to mitigate against the forecast losses that could end up being greater if England’s autumn international matches do not go ahead. England matches at Twickenham generate 85 per cent of the RFU’s revenue with each match potentially bringing in more than £10m (€11.6m).

The June fixture against the Barbarians is already in serious doubt while Twickenham is due to host two concerts by the South Korean boy band BTS over the summer that may also have to be cancelled, again hitting RFU revenues. – Guardian

England and Wales Cricket Board to announce financial aid package for game 19:36
Billy Joe Saunders apologises for video of 'advice' on how to hit women 19:15
Aleksander Ceferin concedes season may never be finished 19:36
‘Magnificent’ Conor Connelly remembered after sudden death 16:52
TV View: Mícheál Ó Muircheartaigh helping us all keep the faith 16:34
Here is your handy guide to sport on television this week