Coronavirus: ‘More than ever we need to see the Six Nations completed’ 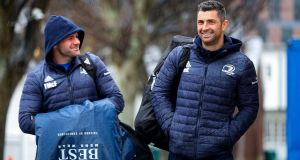 For the likes of Fergus McFadden (left) and Rob Kearney, whose contracts expire at the end of this season, it is not a good time to be seeking jobs inside or outside the game. Photograph: Tommy Dickson/Inpho

In the greater scheme of things, especially given the increasing loss of life caused by the Covid-19 pandemic, the postponement or cancellation of sports events, and even graded salary deferrals for players, are relevantly minor consequences of life as we’ve now come to know it.

Even so, no less than those involved in any sport, these are worrying times for professional rugby players. Working from home, and being in isolation, is completely contrary to the essence of team sport and there’s no telling what the sport will be like when it resumes.

On top of that there is the real likelihood of loss of earnings or even jobs after the IRFU and Rugby Players Ireland agreed to scaled salary deferrals (which also applied to all staff) last Friday. The swiftness with which this was done caught most players by complete surprise.

Although they had received an email signed by David Nucifora, the IRFU performance director, in the previous 24 hours, notifying them that the lockdown which started last Monday was to be extended by another eight weeks with a putative return to training on May 18th, there was no reference to the salary deferrals.

When the latter was announced by the IRFU, in agreement with the players’ union, on Friday, it had only begun to circulate among the 120 or so who are contracted to the Union across all four provinces. For most, it seems, this was the first they heard of it.

There will also be a fear that the Union may not ultimately be able to pay the deferred salaries in part or in full given the prevailing uncertainty caused by the coronavirus pandemic.

There will also be huge concern among players, for that matter, who are contracted until the end of the 2020-21 season given the multimillion losses which the sport will incur, meaning salary cuts and job losses will affect the game.

“There’s definitely a risk of that happening,” says Niall Woods, the former Leinster, London Irish and Ireland winger who was CEO of what is now RPI and is now MD of Navy Blue Sports agency, which represents 35 players.

“For example, in England there is talk of smaller squads to keep within the salary cap and if the size of squads is reduced from, say, 40 players to 37 or 38 that means there will be less professional contracts to go around next season and the year after.”

“It’s no different in Ireland,” admits Woods. “The same risks apply here, but that’s why more than ever we need to see the (2020) Six Nations completed and for the Irish team to finish as high as possible.”

“When the Irish team does well, the whole game in Ireland is financially better off. It’s a different model from England and France, and by and large this is still a better place to be for Irish players. The way the IRFU is funded and the way they run the game has been fairly prudent.”

At least the IRFU’s intention is to reimburse the players and staff in full in due course if they can. Of course, if there is no resumption/conclusion to the 2019-20 season, or worse still Ireland’s two postponed Six Nations games at home to Italy and away to France are not rearranged, then that may mot be possible. But for the time being, the salary cuts are due to be reimbursed.

By contrast, come Friday, without any home match-day revenue or Premiership funding for the foreseeable future, talk of 25 per cent cuts in salaries across the top flight clubs in England was already in full swing when Wasps were first out of the blocks in confirming as much.

Financially, Wasps are struggling the most of any Premiership club, but they have been followed by Bristol, Gloucester, Worcester, Leicester and Saracens, with Northampton, London Irish, Bath, Sale and Harlequins expected to emulate them next week. The only exceptions are Exeter Chiefs.

Some of the 35 players on the books of Navy Blue Sports are based in England and Woods says: “Those 25 per cent cuts are for the foreseeable future, and for how long remains to be seen. If it’s for another three months will that mean abandoning the season? Looking at it, it’s unlikely this current season is going to be finished in any meaningful way with the exception of the Six Nations games.”

In the meantime, like the vast majority of us, the players are adapting to the new normal. Yet we are only at the start of this process. The provinces went into lockdown last week but by Friday, Nucifora had notified the players that this would be extended for at least another eight weeks.

“Due to the impact of Covid-19 and the inability of squads to train collectively the decision has been made that all contracted players across all four provinces (senior, development & academy) will be stood down for eight weeks until the 18th May,” Nucifora informed them.

After such a lengthy off-season, the players would then need a pre-season of sorts, before running off some kind of meaningful end to the 2019-20 Guinness Pro14 and Heineken Champions Cup in an eight-week bloc over July and August, although as Nucifora also outlined to the players, this is clearly a best-case scenario.

“This is dependent on a number of factors not least the lifting of restrictions on collective training. The IRFU will be liaising closely with the provinces over the coming weeks to support you in what are extraordinary and challenging times for everyone. This action will be reviewed based on Government, medical and public health advice and we will communicate updates via the provinces in due course.

Meantime, the players are adjusting.

“They are quite realistic,” says Woods. “A lot of the time they live in a bubble but they can see how this coronavirus pandemic is affecting the country and the world and they understand the serious risk of the virus spreading.”

“But this is completely new and different from anything they’ve ever experienced. Even in pre-season, they are all training together every day. Some are managing to train in small groups of three or four, while observing social distancing, while some are training on their own.”

“Some players do have outside interests, such as studies, and can go on line to their colleges. Usually there’s an element of cramming to their studies but now they might be able to get on top of them.”

“But, a bit like everybody else, no matter how diligent they are about training on their own, it’s impossible to keep fit enough to play a match and it’s particularly hard for those rehabbing from an injury. They can’t even see a physio in person.”

Players not having a physio on tap? Uncharted waters indeed.