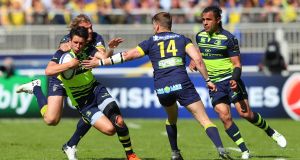 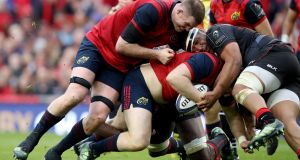 After last weekend’s rugby I’m convinced more than ever that speed will always trump size.

Forgive me for returning to an old refrain, but once again Col John Boyd’s “OODA Loop” (Observe-Orientate-Decide-Act) comes into play. A major antithesis to the loop is the preordained plays that modern rugby implements ad nauseam, where teams are intent on building multitudes of phases so that by the 15th phase a certain hole may open at a certain point where the preordained strike runner can pounce. But how many tries are scored through pre-ordained plays?

The more I delve into rugby the more I conclude the pitch is still 70 metres wide. So win a lineout or scrum, get to the gainline quickly and then play rugby. (Ah, but what does “play rugby” actually entail? That’s the exciting part).

If it works once, keep doing it until the opposition figures it out. As Leinster struggled against Clermont’s opening onslaught, Joey Carbery carried on 6 min 15 sec. He was hit high by Clermont’s outside centre, Aurélien Rougerie. The Leinster crowd erupted, but there was a lesson to observe. Why did Rougerie make such a sloppy high hit? Leinster had won a lineout, with Luke McGrath hitting Johnny Sexton. With a four-player Leinster box attack, the Clermont midfield was fixed and Rougerie was vulnerable. Garry Ringrose floated a beauty to Carbery, who goose-legged onto Rougerie’s outside shoulder where pace trumped size, forcing the sloppy take-down. Had Leinster observed Rougerie’s vulnerability? If so, simply repeat.

Meantime, Morgan Parra’s try-scoring pass to David Strettle is an example of the loop at play. First he had to “observe” how Leinster reacted to the 10-minute loss of Isa Nacewa, then “orientate” – were Leinster’s actions characteristic to them or were they doing something unusual to fill the space? Only at this stage could Parra “decide” what to do and then “act”.

That he has the skill-set to match the first three parts of the loop meant Strettle scored. Equally, a team can, in observing (video nerd and actual real time) while orientating to the opposition attack, conclude, as Saracens did, that by not over-engaging in the breakdown and keeping an aggressive fringe defence both sides of the ruck, Munster will simply run repeatedly into the wall.

Many players (and coaches) can become bogged down in preordained plays when something really obvious to those familiar to the loop can be spotted.

On Wednesday, at the final game of our Old Crescent under-18 season, we were faced with similar questions as Garryowen’s winger was sin-binned. It was a super game which Garryowen won and with Daniel Feasey at openside were excellent over the ball. They were also very clever in their backline attack, scoring two tries off attacking scrums.

Their centre Jamin Hoffmann was especially comfortable in maximising his resources, equalled by Old Crescent’s Aran Egan’s brilliant goal-kicking. That said, Old Crescent’s post pre-ordained (off the cuff) plays were superb and heartwarming. Defence off scrums aside, there was very little to separate these old rivals, with both, I fancy, learning from each other.

Namely, how to observe and orientate space that can be exposed. This is where our game can improve dramatically: firstly, keep pre-ordained plays to a minimum and simply play. To do this our skill-set and knowledge of space post pre-ordained plays must improve.

Why is this pertinent? By half time Munster were struggling to gain scoreboard purchase on the best opposition they had faced this season. A half-time stat struck me: Munster enjoyed 39 per cent of field position deep in the Saracens half, and massive possession but with no real return. Add another stat and the antithesis of the OODA Loop evolves. In that 40 minutes Munster made 22 pick-and-goes along with 59 one-out passes. That’s 81 plays within a yard or so of the breakdown. That Saracens were stacked heavily on the fringes was one thing; that they consistently came off the line at speed was another.

The Munster ball carrier was brave, but . . . At times there’ll be no better option, which is understandable, but 81 times in 40 minutes against one of the meanest defences in the competition? And what picture did this present to the Saracens forwards? Eighty-one times they simply stood where they had stood the previous time and in moving forward swallowed up the Munster ball carriers.

Had Munster observed that their tactics were playing into Saracens hands and had Leinster observed the flagging efforts of Clermont, both outcomes could have been different had they orientated to expose.

For Munster, valuable lessons were learned. For Leinster? Sitting in the stand where the wonderful Clermont supporters jumped Boca Juniors-style for 80 minutes, they lasted longer than their exhausted team. Back to speed over mass: strange as it seems, I was struck after 20 minutes how vulnerable Clermont were looking. Changes were required: Sean Cronin on for his electric ball-carrying, Rhys Ruddock – who had a massive game – to move into the secondrow for Hayden Triggs, with Josh van der Flier on at six. That’d transform Leinster’s speed and oomph across the park, and expose Rougerie for the 51 minutes he remained on the pitch after that first Carbery carry. The team that goes through the OODA Loop quickest always win.

PS Why do teams kick off to the best ball-carrier on the pitch? Why would anyone restart deep into Billy Vunipola’s hands?